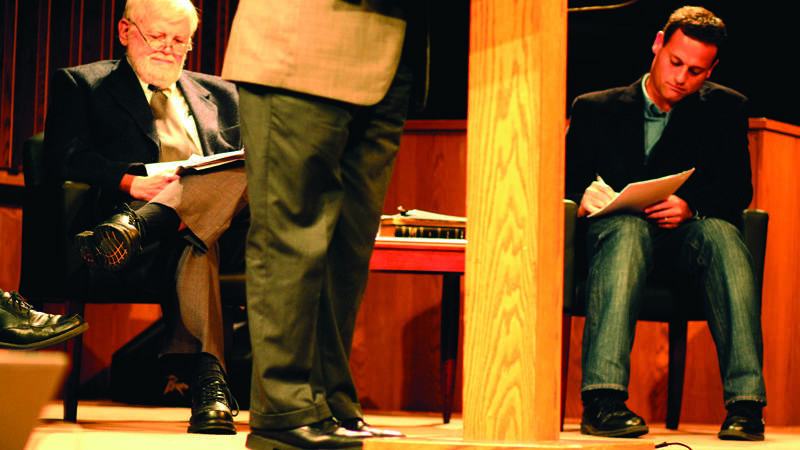 Live from the chapel on the campus at Trinity Evangelical Divinity School:

Students, faculty, and guests are gathering for a much anticipated Trinity Debate on this question: “Do relations of authority and submission exist eternally among the Persons of the Godhead?”

I. Scripture indicates the authority of the Father and the submission of the Son to the Father’s authority from before the foundation of the world until the eternal state.

II. Support for the authority of the Father and the submission of the Son from Church History

III. Theological Implications from Scripture, as Supported from Historical Sources, regarding the authority of the Father and the submission of the Son

Everything in Scripture on this subject indicates the submission of the Son to the Father—in eternity past, in the incarnation, and in eternity future.

We are going to make two main arguments:

What this debate is not about:

II. There are no good reasons to accept the view of Grudem and Ware.

The biggest problem with (1) is that it is assumed but not supported. Also, (5) contradicts (7).

III. There are good reasons to reject the view of Grudem and Ware.

Grudem and Ware embrace “role subordinationism” (hereafter, RS), which may be defined as follows:

Conclusion: There are two possible versions of RS. Taken as a necessary truth, it is flatly contradictory. It claims both that ontological subordinationism is false and then entails that ontological subordinationism is true. Taken as a non-necessary truth, it ascribes an arbitrary relation to the Persons of the Trinity and entails that other versons of role subordinationism are logically possible (and, for all we know, hold true relative to conditions of which we know nothing). So the doctrine is either self-contradictory or metaphysically perfectly arbitrary.

6. Questions from the Audience (15 minutes)