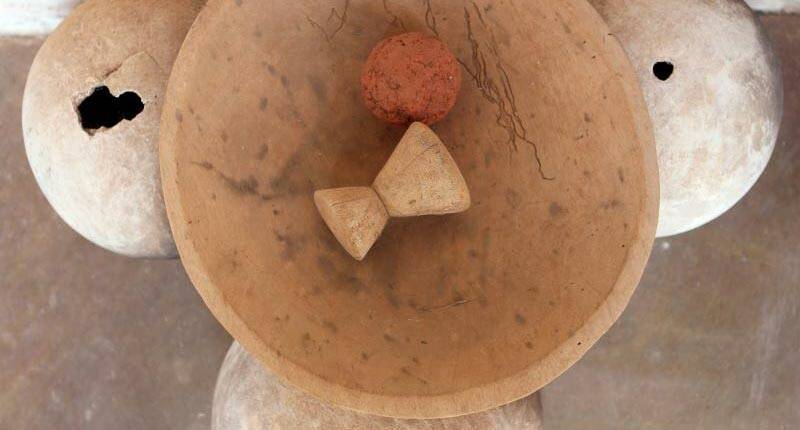 Dealing with Witchcraft: A few forms

Among the more prominent movements in Akan is the anti-witchcraft shrines. Before considering these shrines, though, let us briefly consider several other ways that the Akan people have responded to witchcraft. Many older people I interviewed disclosed to me that in the past the behaviour of persons betrayed their involvement in witchcraft.

If a person frequently cursed others and the pronouncement came to pass, it would be a sign of guilt. For example, if a person pronounced that a pregnant woman would die in child birth and that came to pass, then pronounced again that another would die of drowning in a river and that came to pass, a relative might accuse the person of witchcraft and arraign that person before the chief’s court for a hearing. If the person was found guilty, wotwa no asu na watu ogya ama no akuta, the said witch was ostracised from the clan/nation. This was demonstrated by driving the witch out with a fire-brand in his/her hand. The witch could settle in any other clan or nation.

Alternatively, the accused witch could request the custom of the chewing of odum (chlorophora excelsa) bark. This was a formalised method of divination; it was not carried out by the chief, but it was controlled by him. The accused witch would be allowed to chew odum bark. Vomiting the poison was considered a portent of innocence.  On the contrary, if the relatives of the victim (here now the accused witch) thought that their kinsman appeared as if he/she was going to die, woto ne ti; that is, they would offer to “buy his/her head” (an equivalent of redemption procedure). The specific amount would be paid and the person released. A traditional priest would be asked to exorcise the person. Here, the monetary aspect of the whole practice at the expense of the vulnerable person must not go unnoticed.

Another procedure for finding out witches was the ofunu soa (the corpse carrying). This was the tradition whereby the spirit of the deceased was implored to assist the living to find out the person or witch who killed him/her. With this in the background, the carriers of the corpse were supposedly possessed and directed by the spirit of the dead person to pounce on the culprit.  The culprit was then sent to the chief for hearing. The colonial government in the early twentieth century suppressed both customs.

Another means of dealing with witchcraft was by the aman-abosom (tutelary gods).  They seek to do this by minimizing their power. Traditionally, it was the abosom ( gods) who were expected to protect people from witchcraft, through their priests. It was held that witchcraft could not be exorcised. Either the witches’ power was reduced or they were made powerless through rituals performed on them. It was thought exorcising witchcraft was like plucking the feathers of a live fowl; the feathers would soon grow again.

When witches confessed their witchcraft, the akomfo (priests) were expected to minimize their power. Alternatively, if the traditional priests found out that their clients, that is, persons who had “put their heads under the gods” or sought protection from them, were being attacked by witches, they contacted the suspected witches at night and bargained for their clients. If all efforts made by such priests failed, then they might expose stubborn witches, and compel them to release the souls of their clients. The arrested witches would be asked to confess all the evil acts that they had done.

Significantly, they would be requested to show the priest the kind of medicine that could minimize their power. Or, if the witches had become insane, the priest would administer herbs that would quiet them down, until they became normal. A day would then be set aside for “minimization” of the witchcraft. In the case of a self-confessed witch, this would be done privately. Concerning the witch who was arrested by obosom (a deity), this act would be made public. The ritual for the minimization differs from one shrine to another.

Odomankoma, also called abonsamkom (priests of wizards), was a cultic movement that arose in Asante in 1879-80 during the reign of a king of the Asante, called Asantehene Mensa Bonsu, which also spread to other parts of Akan. The activities included the earlier traditional priests’ approach and the hearing at the chiefs’ courts.

The Odomankoma was an organization of the Asante akomfo (priests of the tutelary gods) who saw that the mordenisation policies of the king of Asante had violated the spirit of the ‘timeless laws and traditions.’  As a result, these priests began to form a movement of priests with a view to eradicating the menacing social evil of witchcraft, which for them had been able to influence the king to effect changes in social life.

Meanwhile the king of the Asantes had discouraged the going for wars. These traditional priests also had a lot of income from the preparations of ‘fetishes’ or ‘amulets’ for soldiers who often went for war. Of course, the motives of the priests might include regaining money through the Since life is full of ups and downs, and some people still believed that the perplexities in life were mostly caused by evil forces…, the suppression of the “saviour movement,” … was only to re-emerge at a later date.service charges of the making of ‘fetish’ for soldiers, which had been stopped, because the king had a general dislike of war.

Initially the movement, whose main activities were geared towards witch finding and the ‘healing of witches,’ had the endorsement of the king of Asante.  It was said that he was cautioned against this support by one of the sons of the Asante kings, who saw those practicing priests as impostors. But the king could not accept it.  Apparently it was claimed that the movement grew to one with over a thousand adherents. However, later the Odomankoma cult set up a forum of hearings similar to the court of the Asante king.  By establishing it in opposition to the Asante king in a court of law, Odomankoma acquired broad political overtones. It is thought that in effect it came to be a focus for all manner of dissidents.

Its operation included confession, conviction or acquittal, absolution in the form of ‘medicine’ and subsequent protection from malign influence; all these involved payment. Thus the movement became very wealthy through its anti-witchcraft activities. As the Asante king did not consent to the setting up of a court of law by the movement, in 1880 some armed members of Odomankoma unsuccessfully attacked him in council.  Eventually, the Asante king crushed the movement; many of its members were executed, but not without repercussions. The Asantehene confiscated all the wealth of the Odomankoma movement to the state. Such confiscation of property from people who had been accepted by majority of the people in society, but had been executed became a policy, and this policy coupled with the underpinning support of Odomankoma adherents ultimately led to the destoolment of the able king.

The Odomankoma, Anti-Witchcraft Shrines & the Church

A number of observations among the emergence of Odomankoma, which are in common with its broadly typological successors (anti-witchcraft shrine, some African Initiated churches and Pentecostal/Charismatic churches) come into focus:

Thus, Odomankoma was clearly a pre-colonial anti-witchcraft cult that was successfully suppressed by the then king of Asante, at least publicly. However, the rapid growth of Odomankoma in a disordered society hints that it must have served the needs of the people. Since life is full of ups and downs, and some people still believed that the perplexities in life were mostly caused by evil forces, as they teamed up with the witches, the suppression of the “saviour movement,” just like other cults, was only to re-emerge at a later date.

The practices of Odomankoma were to re-emerge in the anti-witchcraft shrines, some African Initiated Churches and Pentecostal/Charismatic churches. I intend to highlight this in my next post, before touching on witchcraft issues and the Bible.

Opoku Onyinah (PhD University of Birmingham) is the Chancellor of Pentecost University College and the Chairman of the Church of Pentecost.
All posts by Opoku Onyinah   |   follow on
View Add a Comment
A Condition for Jubilee and JusticeImage-Flourishing Thwarted: Jubilee Confronts Jealousy
Sapientia RSS
Newsletter Sign-up
More in Church & Culture See All
More in Witchcraft Accusations See All