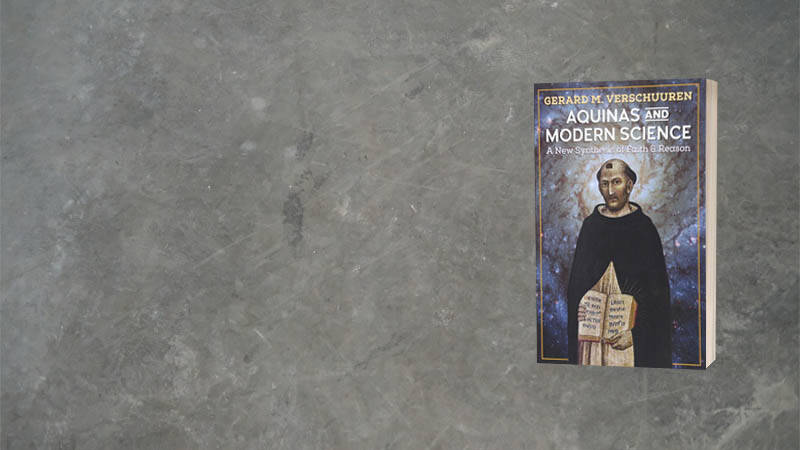 Thomas Aquinas and the Science of Science

A Review of Gerard M. Verschuuren, Aquinas and Modern Science:

A New Synthesis of Faith & Reason

The goal of this ambitious book is twofold: first, to introduce Thomas Aquinas’s philosophy; second, to interpret the modern sciences in light of that philosophy. The intended audience is primarily scientists who are philosophical greenhorns and students.

Despite the fact that its subtitle promises a new synthesis of faith and reason, the book contains very little discussion of Aquinas’s theology, or the theological challenges that arise from synthesizing Thomas’s thought with the sciences. A more accurate title would have been Aquinas’s Philosophy and Modern Science. The decision not to engage Thomas’s theology was understandable (the book covers tremendous ground as it is), but on occasion it seems to have led the author to unwittingly avow non-Thomist positions. More on this shortly. Overall, the book is a success, although given its scope readers will inevitably disagree with some of the author’s claims. After a brief chapter introducing Thomas’s life (ch. 1), the book discusses metaphysics (chs. 2-3), epistemology (ch. 4), Thomas’s thought in relation to the sciences in general (ch. 5), cosmology (ch. 6), physics (ch. 7), genetics (ch. 8), evolutionary biology (ch. 9), neuroscience (ch. 10) and the social sciences (ch. 11).

The Philosophy of Thomas

The discussion of Thomas’s philosophy begins with metaphysics. Metaphysics is the “science of science” (p. 16), the study of the principles of reality underlying specific sciences. Metaphysics is often rejected today due to widespread “scientism,” the view that all knowledge is reducible to physics. Verschuuren offers six succinct arguments against scientism (pp. 18-21). For example, he argues that even physics presupposes the laws of logic, and therefore it is absurd to claim that all knowledge can be reduced to physics. The author’s arguments against scientism will likely be helpful to beginners. His definition of metaphysics, however, was unclear to me. At times he defends the need for metaphysics by defining it extremely broadly. We are told, for example: 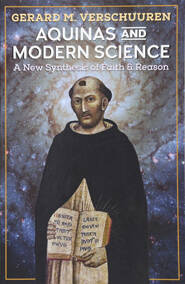 The chapter also includes a discussion of faith and reason. Verschuuren makes much of the fact that Thomas held that faith and reason are ultimately in harmony, even calling this view “quite radical” (p. 22). I should think that this is the standard Christian view of the matter, or at the least a mainstream (and thus not “radical”) view. Today, even self-identified literalists or fundamentalists generally adopt the same principle, namely, that faith and reason are in harmony. They argue (for example) that the early chapters of Genesis are incompatible with evolutionary theory and thus that evolution is false—not that evolution is true in its own sphere but false in another.

Chapter three discusses some of the basic principles of Thomas’s metaphysics: including his views of esse (the act of existence), matter and form, and primary and secondary causality. Given how controversial these topics are among interpreters of Aquinas, one could naturally dispute this or that point, but the treatment serves as a helpful introduction on the whole. Chapter four focuses on Thomas’s epistemology. This chapter contains extensive criticism of Hume’s skepticism; the author argues that one of its roots is that Hume thought of causation merely as a series of events (p. 61). Verschuuren also helpfully discusses the empirical emphasis of Thomas’s epistemology.

Thomas and the Sciences

Chapter five discusses Thomas’s relation to the sciences in general. The author seems to argue that Aquinas himself contributed to the natural sciences. The chapter begins by noting that many people assume that Aquinas did not contribute to science in the contemporary sense. But then he argues that “[i]f we consider this broader sense”—namely, science qua “any systematically arranged branch of knowledge” (p. 80), then we can think of Aquinas as having been involved in the sciences. If this is the sense in which Aquinas was involved in the sciences, however, then we don’t have a reason to give up the view that Aquinas didn’t contribute to the natural sciences in the contemporary sense. It is also suggested that Thomas’s thoughts on the vacuum may have provided an impetus to modern thought on inertia (pp. 81-82). Another suggested reason is that Thomas’s epistemology “gave all human knowledge, which includes science, a firm empirical basis” (p. 83). On the whole, the relation between the influence of the Bible in general and Thomas in particular was unclear. Many of the things attributed to Thomas—e.g., trust in a benevolent creator—are standard Christian beliefs.

Chapter six discusses cosmology. Drawing on William Carrol and others, Verschuuren argues that the big bang is compatible with the Christian doctrine of creation. His criticism of Hawking’s claim that the universe can create itself is cogent and clearly explained (p. 94). This chapter contains some misleading claims about Thomas’s perspective, which seem to be related to the book’s lack of attention to theology. We are told, for example, that “Aquinas was not really concerned about the answer to this question” (p. 91), namely, the question of the eternality of the world. But this is false: Thomas held that the affirmation that God created the world ex nihilo was de fide.  Another example is the author’s treatment of primary and secondary causality, which seems to neglect Thomas’s robust affirmation of miracles and imply that Thomas held that God would never interrupt the natural course of secondary causes (p. 105).

Chapter seven discusses classical physics and quantum physics. The development of classical physics focused on mathematical equations, leading to the neglect of knowing things through our senses (p. 108). Physics gives “a description of the mathematical structure of physical reality. It ignores or neglects any aspect of reality that cannot be captured via its exclusively quantitative methods” (p. 109). We shouldn’t conclude, from the fact that something is absent from physics, that it is absent altogether. Next is an extended discussion of action at a distance (pp. 111-116). Thomas’s rejection of action at a distance has not been disproven by physics, Verschuuren argues. The chapter contains a discussion of several of the prominent interpretations of quantum mechanics. On Bohr’s “principle of uncertainty,” values are uncertain until they are measured. The uncertainty principle should be taken epistemologically, such that we cannot know with certainty the fundamental behavior of particles.

Chapter eight begins with a brief discussion of the history of DNA. The classical definition of a gene is a unit of heredity that regulates a trait of an organism. Many people nowadays believe that DNA contains the “script for a person’s entire life” (p. 130). Verschuuren argues that, on the contrary, DNA is divisible into atoms, which are themselves divisible into sub-atomic particles, which still need an explanation of whence they derive their reality, unless sub-atomic particles are the most fundamental substances. Then he asks, “Instead of seeking an endless series of sub-sub-explanations, why don’t we just simply state instead that a human being is a simple substance with accidents that are divisible into parts such as DNA?” (p. 130). If I understand this argument correctly, Verschuuren suggests that the answer to someone who holds that DNA is the fundamental reality of the human being is this: we are a whole composed of parts such as DNA. I don’t see how this helps, for presumably those who hold that DNA is fundamental may also maintain that a human being is a whole composed of parts (just as those who hold that subatomic particles are fundamental hold that we are composed of subatomic particles).An important general question is whether evolution is compatible with Thomas’s thought. The author argues that Aquinas would have accepted evolution. Perhaps. Verschuuren argues that the formal cause of DNA is the substantial form of the human being (p. 105). Pages 143-145 argue that there is no tension between attributing the development of DNA to chance at the level of secondary causality and attributing it to attributing it to God’s providence at the level of primary causality.

Chapter nine turns to evolutionary biology. An important general question is whether evolution is compatible with Thomas’s thought. The author argues that Aquinas would have accepted evolution. Perhaps. But Verschuuren does not acknowledge the fact that Thomas defended a view of creation—in which Adam is created directly from the dust—that is clearly incompatible with evolution. It seems that this (and other tensions between Thomas’s own views and evolutionary theory) should have been addressed more clearly. Still, the chapter contains a stimulating discussion of the causes of evolution.  The final cause is fitness, including both potential reproductive fitness and actual reproductive fitness; both are built into the cosmic design of creation (p. 159). The formal cause of evolution is its “design concept” (p. 162), which comes from God.

Chapter ten turns to neuroscience. A series of arguments against reducing the mental to the neural is given early in the chapter (pp. 180-186), followed by a discussion of the implications of the mental-neural distinction. The author helpfully distinguishes Thomas’s hylomorphism from dualism and convincingly argues that the former is well-suited to synthesis with contemporary neuroscience. The chapter also includes an in-depth defense of Thomas’s view that the soul continues to exist after the death of the body. In chapter eleven, Verschuuren discusses sociology (pp. 206-211), economics (pp. 211-219), and the political sciences (pp. 219-232). These subsections are helpful but extremely brief.

The book does not have footnotes or endnotes. It seems to me that students (and experts) would have benefitted from their inclusion, especially references to Thomas’s works. The lists of recommended readings at the end of each chapter should have been longer. At times crucial books were omitted (for example, Torrell’s magisterial biography was not listed in the recommended reading for chapter one, on Aquinas’s life). On the whole, however, this book will serve well as an introduction to the fascinating, extremely important question of the intersection of Thomas’s philosophy and the contemporary sciences.

Daniel W. Houck (PhD Southern Methodist University) is the Senior Pastor of Calvary Hill Baptist Church in Fairfax, Virginia. He was a Henry Resident Fellow in 2017-18 and is currently writing a book on Aquinas, original sin, and the challenge of evolution.
All posts by Daniel Houck   |   follow on
View Add a Comment
A Letter to the FoolA Fool and a Heretic Inciting a Revolution?
Sapientia RSS
Newsletter Sign-up
More in Book Review See All
More in Creation Project See All