Christology and the Grammar of Createdness

From his earliest years at Cambridge, when Christology was “exceptionally lively and disputatious” (p. ix), Rowan Williams has returned to the topic, here and there, as his remarkable ecclesial and academic career progressed. Indeed, it is hard to imagine this book could be produced otherwise. Its range, density, and measured judgment belie long, patient reflection.

The text was drafted for the Hulsean Lectureship at Cambridge in 2016 and expanded for publication last year. Its key voices are Maximus the Confessor, Thomas Aquinas, John Calvin, Dietrich Bonhoeffer, and Erich Przywara. Many other figures feature as well. Williams is consummately sensitive to historical context, and so his major figures remain saturated in their intellectual traditions. And, as I will argue later, so should ours. Even those of us with analytic inclinations. 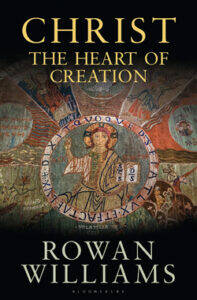 The chief provocation for Williams’s argument are the Bampton Lectures (Oxford 1948) of Austin Farrer, wherein Farrer argues that “when we attempt to think of God, we are attempting to deploy and clarify a notion of agency that is unbrokenly using its entire resource, generating possibilities for every other conceivable agent and fully exercising an unlimited intelligence.” Thus, “infinite agency can never be prayed in aid to fill a gap in finite causal chains” (p. 2). This, Farrer insists, “holds the key to a range of theological puzzles . . . without a clear account of what we might call the logic of createdness, the most central elements of classical Christian theology will simply be a set of dead ends for thought” (p. 5).

Where Farrer turns to the logic of createdness to explicate Christian doctrine, Williams’s goals are slightly, yet importantly, distinct. “Farrer uses a model of finite/infinite relation to illuminate a range of doctrinal questions; my question is about how the evolution of doctrinal formulae itself prompts the clarification of that model” (p. 6). Williams describes this model several ways: as one of “non-dual, non-identity,” as grounded in the proposition that God is not another thing (Cusanus’s non aliud), and, following Kathryn Tanner, as non-competitive transcendence (p. xiv). But his primary aim is not the crisp articulation of such a model. Rather, he is after those features of historic Christian reflection on Christ which, over time, “generate a new and fuller grasp of the ‘grammar’ of createdness” (p. 6).

This objective calls for an argument saturated in intellectual history. In order to demonstrate the impact the development of the Christian understanding of Christ had on the logic of creation, Williams proceeds to give a series of textured analyses of major figures in the history of Christology.

Figuring the Esse of Christ

Somewhat surprisingly, Williams begins in the thirteenth century, in the debates over the essential existence (esse) of Christ in Latin scholasticism. Williams deftly recites the debates over whether Christ has one divine or else two (one divine, one human) esses. His preference is for the position of Thomas Aquinas, that Christ possesses one esse, the esse of the Word. This must be so, Williams posits, because it implies, against Richard Cross’s Scotist position, that the divine-human relation is non-competitive. According to Williams, Thomas’s speculative Christology aims to insure “that there is no room for any notion of incarnation is a heavenly individual ‘turning into’ an earthly one” (p. 12). Where Scotus insists the integrity of Christ’s humanity requires its own essential existence, Thomas recognizes the assertion of two esses entails that, in some sense, the creating Word and the created humanity of Christ are two instances belonging to a common class (p. 22). So, Aquinas rejects the dual esse position as tantamount to Nestorianism, and with his position on Christ’s singular esse upholds the non-dual non-identical model of the Creator-creature relation.

Other figures receive similarly disciplined readings. Together, they demonstrate the relevance of the God-world relation on many matters of Christian life and thought. So, for instance, Williams argues the provocation for a non-dual, non-identical Creator-creature relation is encoded into the New Testament itself, in the decision to portray the Logos as a Galilean. As he puts it, the New Testament refuses “to turn the narrative of Jesus into one in which heavenly agency and revelation displace a story of highly particular and embodied transactions within the human world” (p. 117). This refusal is the very thing upheld at Nicaea and Chalcedon. And it is given increasingly refined articulation in the East by Leontius of Byzantium, Maximus the Confessor, and John Damascene. In the West, Thomas develops a similar vision.

After Thomas, the late medievals, especially Ockham, receive a rough go of it. Martin Luther’s account of the communication of idioms marks a low point, the alteration of human nature as nature as a result of the hypostatic union. But Calvin comes through unscathed. Not only is the extra Calvinisticum a fitting rebuttal to Luther’s communication of idioms. It belies Calvin’s more fundamental commitment to non-dual non-identity. He is “clear as humanly possible that divinity and humanity never stand side by side” (p. 163).

Calvin’s ecclesial extension is further extended by Bonhoeffer into an ethics and politics of solidarity. Here Williams speaks most movingly of the responsibility of Christ’s body, by the power of the Spirit, to continue his work of ‘standing in’ for the other. So is completed Williams’s argument, asserted at the outset, that Christology is not simply a matter of making sense of this man. It is an invitation into “a credible environment for action and imagination, a credible means of connecting narratives, practices, codes of behavior.” Contemplation of the mystery of Christ’s person opens up “a world to live in” (p. xi).

There are points to quibble, here and there, with elements of Williams’s particular readings. He recites, albeit briefly and without much heat, the trope of late-medieval decline into nominalism. His attempts to acquit the Franciscan scourge by noting admiration for Bonaventure mostly amounts to heaping more praise upon Aquinas.Is this not too much casting about in historical minutiae? Wouldn’t we be better served with a crisp, straightforward argument? And his engagement with Duns Scotus’s own thought is notable for his uncharacteristic focus upon a contemporary interpretation of the Subtle Doctor. While he confronts Richard Cross’s interpretation of Thomas with his own characteristic appeal to the primary sources, Williams follows the English preference for reading the Scot with little sympathy.

And there are questions to pursue concerning matters of substance. It is, for instance, difficult to imagine how the miraculous is in any sense possible in a cosmos described by Williams. If God cannot, in Farrer’s terms, “fill a gap” in finite causal chains, how are we to account for the sudden appearance of flour in the widow’s jar? What explanation could be given which upholds Williams’s rule that “any embodiment of divine agency within the finite world must be in the form of genuinely finite action” (p. 221)?

But I want to comment on another matter. What are those of us inclined to the speculative exercises of scholasticism to make of Williams’s method? Is this not too much casting about in historical minutiae? Wouldn’t we be better served with a crisp, straightforward argument? Could we not fine tune these concepts further, and more efficiently, by carefully executed disputation?

It is hard to imagine such questions issuing from the founders of Latin scholasticism. Scholasticism, in its roots, is interlocution. It is the casting of the mind into the swirl of discourse, debates, convictions,And, as Williams displays, the wisdom buried in the depths of that tradition retains the promise of creative insight, given disciplined reflection on the fonts themselves. and wisdom hidden in many thinkers spanning many cultures. Its origins lie in the certainty that one God, Truth Himself, is the author of all truth, most especially that of Scripture and the Fathers’ contemplation of Scripture. The scholastic disputation is an organic emergence from early Christian commentary on Scripture.

Scholasticism’s verities—its prioritization of clarity, subtlety, precision, comprehensiveness—grow idle once turned from that wisdom which animates the great minds of the past. Indeed, those verities proved their value only insofar as they serve that wisdom. The scholastic orientation is not merely to a set of logical standards, but also to a deposit. So the true scholastic ought not only sharpen her tools for logical analysis, but also the tools now associated with the historical guild: languages, attunement to cultures, sympathy for figures.

Of course, this is not to say that every theological argument should take Williams’s form. The scholastic disputation is a venerable and worthy tradition. But it is a dependent tradition, dependent upon the light of those who have gone before. Its origins in Abelard, Lombard, and Anselm make this clear. And, as Williams displays, the wisdom buried in the depths of that tradition retains the promise of creative insight, given disciplined reflection on the fonts themselves. The engine of scholasticism is two-fold: (1) inviolable submission to the highest standards of clarity and precision and (2) submission to the wisdom of the Masters. For those of us inclined to fixate on the former, Williams’s historical standards and creative interlocutions chart a contemporary path to the latter. Justus H. Hunter (PhD Southern Methodist University) is Assistant Professor of Church History at United Theological Seminary. He is the author of If Adam Had Not Sinned: The Motive for the Incarnation from Anselm to Scotus (The Catholic University of America Press, 2020).