Freedom, Determinism, and the Natural Sciences 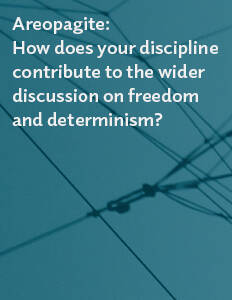 The belief that human persons are free and morally responsible is a common intuition. And it is more than this: it is a basic conviction of Christian theology. But what does it mean to say that we are “free?” Philosophers and theologians have debated this question for centuries, and while the arguments continue, there is widespread agreement that for an action to be free it must meet two conditions. First, the action must be within our control; it has to be “up to us” in an important way. And, second, it must be rationally motivated. Exactly what it takes to meet these conditions is the subject of ongoing debate, but there is general consensus that the two conditions are important.

Human Freedom, Determinism, and the Sciences

Historically, these debates have been the province of philosophers and theologians. More recently, however, scientists have weighed in on such matters as scholars from psychology to physics make pronouncements on how insights from their respective disciplines advance—or end—the debates. What are we to make of such claims? What can we learn about free will from the natural sciences? And how does this information impact our theological understanding of divine and human action? It seems that we need yet more clarity about the “state of the question.”

In psychology, for example, the famous behaviorist B. F. Skinner gave this memorable conclusion: “I did not direct my life . . . I never made decisions. Things always came up and made them for me. That’s what life is.” What would it mean for a Christian account of reality if Skinner were right? Would it mean that Skinner was right when he said that “love” was merely “another name for positive reinforcement?” Skinner is only one, albeit influential, voice among psychologists. Does he represent a position held by most? What other approaches to psychology are available? Surely the discipline of psychology, whether social, moral, or otherwise specified, has much to contribute to the conversation about human freedom and responsibility.

What happens if we “drill down” beneath psychology to neuroscience, biology, and the study of genetics? A headline in Scientific American recently proclaimed that “new research” in neuroscience “suggests that it [free will] might be nothing more than a trick the brain plays on itself.”See, e.g., https://blogs.scientificamerican.com/mind-guest-blog/what-neuroscience-says-about-free-will/ Is this the consensus among neuroscientists or more reflective of folk understandings? Either way, what is the scientific evidence used to support this conclusion, and what are the implications drawn from it? Similar questions arise from human genetics about whether I am pre-programmed to one course of action, or at least to one very narrow set of possibilities. This is a common ‘folk’ perception. But does the science actually support such conclusions? Again, what are the range of positions in these disciplines regarding human freedom and responsibility, what is the evidence that supports those positions, and what are the implications drawn from them?

Physics and the Quantum Realm

And we can go yet deeper, asking questions about modern physics and the quantum realm. Here, too, we may ask: do the laws of physics somehow entail determinism? If so, does that eliminate freedom and meaningful human action? On the other hand, particular interpretations of quantum theory (i.e., the “Copenhagen” interpretation) conclude that there is genuine indeterminacy at the most basic levels of physical reality. Does this mean that human agents are free? Or would this be mere chaos and randomness—and would such randomness be incompatible with rationality? In other words, despite its seeming abundance of “freedom,” would such an interpretation of quantum theory actually be bad news for belief in human rational freedom? There is, of course, also the possibility that whatever happens at the quantum level is simply irrelevant to discussions of free will. So once again we ask: what does current scholarship in physics and the philosophy of physics say about freedom and determinism?

Human Freedom and the Christian Faith

Even after we’ve reflected on these questions scientifically, yet more questions linger for the Christian and theologian. Just what does all this have to do with a distinctly Christian (and thus theological) understanding of human freedom? Would “too much” indeterminacy mean that some things are out of God’s control and thus somehow threaten divine sovereignty? On the other hand, would an admission that everything is determined in some way threaten to undermine the sense of moral responsibility that is integral to the Christian account of reality? Some Christians are determinists; they are convinced that a proper account of the divine-human relation is one in which God “ordains” all that comes to pass (given God’s all-determining decree) such that there is only one course of action that is open. These Christians tend to be compatibilists as well, for they insist that freedom is compatible with determinism. How would insights from the natural sciences impact determinist and compatibilist theological formulations? Would it be right to conclude that God determines everything via or through or by means of the relevant psychologically-determinative conditions, the biological and genetic makeup, or some combination thereof? Indeed, would this be a way of accounting for “secondary causes” (enough of which are sometimes claimed to be a sort of “buffer zone” between God and the evil that ensues)? Or would such physical causation be a threat to moral responsibility? On the other hand, some Christians are indeterminists. They deny that God pre-determines all that comes to pass, and they think that an incompatibilist account of freedom and responsibility is theologically important. How does recent work in the natural sciences relate to their theology? Does it undermine it, confirm it, or just what?