The Convention and Neuroscience of Free Will

Twenty years out from what has been dubbed the “Decade of the Brain” (1990-99), two central areas of neuroscientific study have emerged with direct implications concerning whether we have free will, and, if so, what kind. One stems from a method of study first developed by Benjamin Libet,

B. Libet et al., “Time of conscious intention to act in relation to onset of cerebral activity (readiness-potential),” Brain 106 (1983), 623-42. which has been widely thought to indicate free will is an illusion. The other provides evidence that the brain activity underlying our choices is not fixed, or determined, beforehand.
As we will see, neither area of study actually answers the question as to whether we have free will. They do, however, help us consider what kind of free will we might plausibly have—a consideration vital to conceptions about ourselves, our responsibilities and roles, and our relationships.

With the discovery of the RP, it became possible to time neural precursors to action in relation to the choice to act. Recognizing this, in 1983 Libet and his colleagues developed a groundbreaking experimental paradigm. They timed RPs while asking individuals to time what has variably been described as the “urge,” or “experience of willing” or “choosing,” to press a button. To their surprise, they found that RPs actually preceded the timed mental event by about 700 msec (see Figure 1). 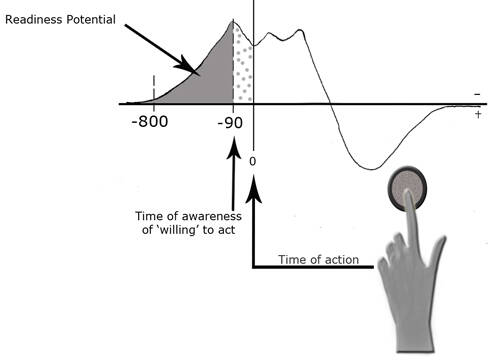 Figure 1. Diagram outlining the timing of action in relation to RPs in Libet’s experiment. (Taken from J. Runyan, Human Agency and Neural Causes (Basingstoke: Palgrave, 2013); Created by A. Pickering.)

Since these initial studies, we now know that RPs occur in the pre-supplementary motor association cortex (pre-SMA). This area is a division of the SMA, a region whose activity is associated with intentional action. SMA activity influences activity in the primary motor cortex (M1), which causes muscle contraction and extension when we act.

Various versions of Libet’s experiment have been performed many times over. In each, Libet’s basic findings have been replicated:

Preparatory processes, contributing to the initiation of bodily motion when we intentionally act, occur before the “experience of willing,” or “choosing,” to act.

From this, it seems the mental event in question is a consequence of these processes. This, in turn, has fueled the theory that bodily motions occurring when we naively think we intentionally, and freely, act actually arise from brain processes that don’t depend on us knowingly doing anything.D. Wegner, The Illusion of Will (Cambridge, MA: MIT Press, 2002); S. Harris, Free Will (New York, NY: Free Press, 2012). In this case, intentionality and free will—as we conventionally think of them—are illusions. We aren’t actually intentional agents, and don’t have free will, as we often think.

The view that Libet’s experiment provides evidence free will is an illusion is based on a particular theory about our agency called “volitionalism.” According to this theory, what we identify as our action is distinguished by a special mental event. This mental event has traditionally been called a “volition,” and is often described as the “experience of willing an act.”Ibid., 3. As Gilbert Ryle points out, the general idea is that, when (or if) we intentionally act, we initiate bodily motion via a “mental thrust.”G. Ryle, The Concept of Mind (London: Hutchinson’s University Library, 1949). Or, at least, this is our experience.

The problem is experiences can mislead, which—when it comes to volitions—is what Libet’s experiment has been thought to show.

There has, however, been a sustained argument against volitionalism—one that predates Libet’s experiment.Cf. Ryle, The Concept of Mind; A. Mele, Free Will and Luck (New York: Oxford University Press, 2006); P. Nachev, P.M.S. Hacker, ‘The neural antecedents to voluntary action: A conceptual analysis,’ Cognitive Neuroscience 5(2014), 193-208. The argument is that we don’t actually use a mental event, such as a volition, to distinguish what we conventionally identify as our intentional or freely chosen conduct. In other words, volitionalism doesn’t align with how we actually distinguish chosen conduct in daily life. It lacks what is called “ecological validity.”

In support of this, when replicating Libet’s experiment with individuals who had suffered damage to a region of the parietal lobe, Angela Sirigu and her colleagues made an interesting discovery. When choosing to move, these individuals didn’t experience an urge or felt desire to move, or anything resembling a volition. They didn’t experience the mental event typically timed in Libet’s experiment. Yet, they had “no difficulty” making choices, “initiating willed action,” or following instructions.A. Sirigu et al., ‘Altered awareness of voluntary action after damage to the parietal cortex,’ Nature Neuroscience 7 (2003), 80-84.  There was no indication they thought their action wasn’t chosen, not their own, or unintentional.The most common symptoms of this sort of parietal damage involve problems recognizing errors in one’s conduct; L. Buxbaum et al., ‘Cognitive representations of hand posture in ideomotor apraxia,’ Neuropsychologia 41 (2003), 1091-1113.

But if Volitionalism Is Mistaken, What’s the Alternative?

Here, it’s important to note that one may be disposed to behave purposively in certain situations, even while having no associated experiences or sensations, and while not engaging in any associated acts or activities. For example, throughout one’s drive home, one may be disposed to pushing one’s garage door button once arriving home, without having any associated experiences or sensations or thoughts about it; and without any related acts or activities occurring up until one arrives at one’s garage. The point is that being so disposed is a state that doesn’t coincide with the occurrence of any mental event, or act or activity, of the sort timed in Libet’s experiment. Thus, instead of being distinguished by a kind mental event, our intentional and chosen conduct is distinguished by being the expression of a kind of disposition.

To cut to the chase—on a dispositional account—behaving intentionally is behaving purposively in ways that satisfy one’s expectations about the way one is expressing one’s agency. As such, this behavior is the expression of the sort of disposition that can only be expressed by agents knowledgeable or aware, in some respect, of what they are doing, and what else they might be doing instead. And, here, it is important we don’t confuse awareness with attention. Awareness is a state which makes possible, or provides the opportunity for, certain behavioral and mental acts and activities—including the activity of attending to what one is doing. As such, awareness doesn’t coincide with attending to what one is doing, or any mental event that might serve as a candidate for a volition.

When it comes to Libet’s experiment, if a dispositional account is correct, engaging in the purposive behaviors one has agreed to as part of the experiment is quite simply expressing a number of intentions. These include the intention to follow instructions, to move one’s arm, and to press a button. And each of these is expressed simply by the acts of following instructions, purposively moving one’s arm (and thereby causing certain muscle contractions), and purposively pressing a button, respectively. Each behavior is simply an expression of being disposed to behave in certain purposive ways, which is a state. No mental event like a volition need occur for this to be the case.

The implication is that Libet’s experiment doesn’t provide evidence against the idea we are intentional agents who, at times, freely make choices. At most, it provides evidence we don’t have free will as volitionalists conceive of it. But, at the same time, what we’re learning from this line of study seems to align with a dispositional—and more conventional—account of our agency. In this way, Libet’s experiment helps delineate the kind of free will we might plausibly have.

If it’s true our conventional notions about our agency are dispositional, it becomes hard to see how further neuroscientific study aimed at timing neural precursors of action might undermine these notions. Even if neural precursors could somehow be used to predict with 100% certainty what one will do on a given occasion, this would not negate either:

(a) that the predicted behavior will be the expression of being so disposed; nor

(b) that one will engage in this behavior aware of what one is doing and what else one might be doing instead, and with certain expectations.

Rather, these neural precursors may simply underlie—and be necessary for—the fluid expression of being disposed to act purposively in this state of awareness.

Now, if we could use neural precursors to predict with 100% certainty what one will do on all occasions, this would go against a certain notion of our agency. It would go against the idea that, at times, how we express our agency settles previously unsettled matters. So—for example—it would go against the idea that, by pressing the button on my garage door opener, I settle that the button is pressed on a particular occasion. It is up to me, and what I do, whether it is pressed. The notion we express this kind of agency is called “libertarianism,” and it is incompatible with the idea all we do is fixed, or determined, beforehand.

Interestingly, there is growing evidence that states of consciousness, and awareness, involve stochastic—not deterministic—brain states and processes.E.g., M. Fox, M. Raichle, ‘Spontaneous fluctuations in brain activity observed with functional magnetic resonance imaging,’ Nature Reviews Neuroscience 8 (2007), 700-11; A. Schurger et al., ‘An accumulator model for spontaneous neural activity prior to self-initiated movement,’ Proceedings of the National Academy of Science USA 109 (2012), E2904–E2913. What this means is that the best models for neural precursors pivotal to our action, and how they unfold, are probabilistic. They only probabilistically predict how patterns of activity in the cerebral cortex, and elsewhere, will develop. Thus, neural precursors have only been used to probabilistically predict a person’s choice, even milliseconds beforehand.E.g., C. Soon et al., ‘Unconscious determinants of free decisions in the human brain,’ Nature Neuroscience 11 (2008), 543–545. This is true even in tasks where a person is making a forced choice; for example—when following instructions by pushing a button whenever they choose.

Two things should be noted about the seeming stochastic nature of neural precursors to chosen action. First, it aligns with what we should expect of processes underlying readiness, or preparedness, to express a disposition, given the possibility of intervening factors (including other dispositions). Second, it aligns with what we should expect if neural precursors don’t fix, or determine, all that we do beforehand. Having said this, whether even a stochastic nervous system could plausibly accommodate libertarianism continues to be a matter of debate.D. Pereboom, ‘Determinism al dente,’ Noûs 29 (1995), 21-45.  There does, however, seem to be reason to think it could, given certain conditions, and that complex nervous systems satisfy these conditions.J. Runyan, ‘Agent-causal libertarianism, statistical neural laws, and wild coincidences,’ Synthese 195 (2018), 4563-4580.

In sum, it seems our neuroscientific findings are consistent with—if not supportive of—a dispositional approach to free will. It also seems that complex, functioning nervous systems aren’t deterministic systems. The implication: all we do isn’t fixed, or determined, by causes operating in our nervous system beforehand.

Ultimately, this doesn’t answer the question as to whether we have free will; or as to whether we determine some of what happens by making choices. But it does help us think better about how to approach these questions. It helps orient us toward where we might go for further answers.

The upshot is that neuroscience provides space for further inquiry. In particular, it provides space for inquiry concerning our conventional notions about free will, moral responsibility, and our relationships, which involve psychology, philosophy, ethics, and theology.