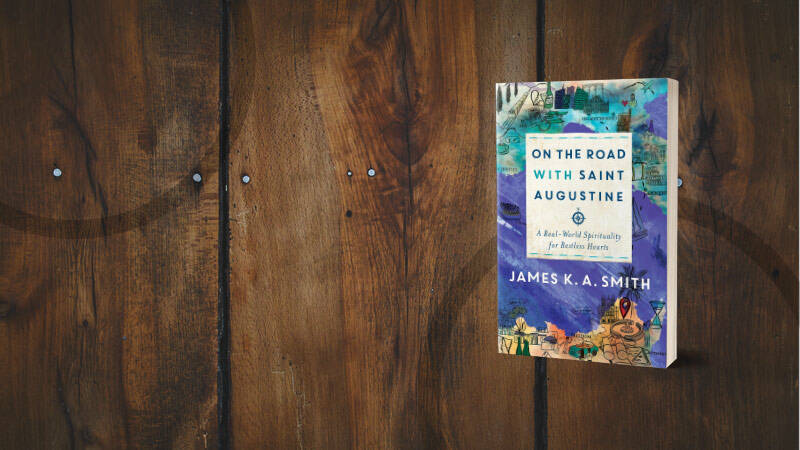 What Augustine, James K. A. Smith, and You Have in Common

Since the first edition of Peter Brown’s magisterial Augustine of Hippo: A Biography in 1967, interest in the life, work, and thought of Saint Augustine has exploded across Catholic and Protestant circles, and across large swaths of the university disciplines. This is a welcome revival, in my view, for at least three reasons. 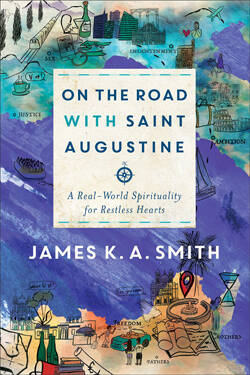 First, in the West, we are far more Augustinian than we realize. Not just theologically, but philosophically, politically, spiritually, psychologically, ethically, and more. Second, this most recent revival of interest in Augustine is one that seeks to understand him in his own words, and not just through the caricatures and agendas of academics. Third, because in Augustine we meet one who loves God with his head and heart more than we do. And upon meeting this Augustine, especially in his Confessions, we don’t begin with arguments and intellectual differences, we begin with our guard down drawn toward the presence of one who, though brilliant and off-the-charts articulate, isn’t impressed with himself. But, rather is completely in love with God and preoccupied with knowing him more.

Over the past decade, James K. A. Smith has habituated readers to Augustine’s thought without many of them knowing it. His On the Road with Saint Augustine: A Real-World Spirituality for Restless Hearts is somewhat a Confessions of its own for Smith, as doubtless many of his devotees will suddenly realize they’ve been drinking in Augustine from Smith’s pen all along. And this, too, is a welcome realization in my view.

Trained at Villanova University during his doctoral studies, Smith was mentored by excellent Augustine scholars and shaped by a community who appreciates “the whole Augustine.”  Many in this community have led the charge toward an “in his own words” retrieval of Augustinian engagement that seeks to hear him not through this philosophical tradition or that theological sect, but truly in the spirit of his own words.

This exposure and training made Augustine more than a set of ideas or dogmas for Smith. It made him a companion. A fellow traveler who wrestled deeply with almost every imaginable matter of life from love to ambition, sex, mothers, fathers, friendship, justice, education, etc., many of which serve as chapters in Smith’s book. A trusted emigre who has “been there” and emerged with greater wisdom and insight than most who came before or since. A sage who, through his writing, bequeathed much to future travelers about real life with God in his world, and the hope of the life to come.

So what to expect from the book?  First, it’s not a book about Augustine. But isn’t it though?

While there is the occasional deep dive into Neoplatonic thought or Augustine’s view of sex (from which Smith demurs, though appreciates in some respects), the book’s chief concern is Augustine’s journey toward God. Thus, in this sense, it is a book about Augustine—especially the early Augustine.

Smith carries his readers along Augustine’s early life as narrated in his Confessions, teasing out key themes with each chapter that, though lesser attended to in academic research, were deeply formative for the brilliant yet promiscuous North African prodigal-turned Bishop. Augustine’s journey serves as both map and mirror for all restless hearts to consider their own journey in solidarity with Augustine’s.

So, it is about Augustine—but, not just Augustine. This book is also about Jamie Smith. Not a biography, but a testimony. As he writes in the introduction, “[The book is] a testimony of someone who has spent time on the road with Augustine . . . I’ve been on a ride with Augustine. Here’s what I’ve seen; here’s what he’s shown me (about myself); here’s why you might consider coming along” (p. xi).

Further, in the final chapter on “Death,” Smith tells of his and his wife’s time on a three week “Footsteps of Augustine” trip in spring 2017 which undergirded the book. In creative Smith fashion, he narrates the moments leading up to his standing before the urn that holds Augustine’s mortal remains. He writes:

For the first moment I think: ‘I can’t believe I’m this close to him.’ But that geographical inclination gives way, and I realize that the sacred charge that enchants this place for me is an odd sense of arrival, the convergence of two journeys. I’ve been on the road with this saint for what feels like a lifetime, and here we finally cross paths and all I can think to say is, ‘Thank you’ (p. 220).

Readers who heretofore have only known Augustine (or Smith) in the textbook sense, merely as a set of ideas to be argued with rather than a fellow traveler journeying toward God, may read in search of an ideological scent to sniff out and then howl about. But this misses the point of the book. And, it may be a disservice to the reader who fails to read introspectively, engaging first with the heart. In this sense, the book is not only about Augustine and Jamie Smith, it’s about us—you and me in various ages and stages of life.

In the chapter, “Mothers,” Smith connects readers to Augustine’s sometimes complicated relationship with his mother, Saint Monica. An occasional helicopter mom, but ever a praying one, Augustine doesn’t always appreciate her long arm of love. Yet, her simple and consistent faith made an immeasurable impact on Augustine. But Smith considers more than the son-mother relationship. He writes with mothers in mind. In one of my favorite paragraphs of the book, he offers:

I know this mother. She sleeps beside me every night. She prays at a Pentecostal church in Lagos every Wednesday. She is awake in Rio, heart whirring, until the door clicks and the light goes out. She keeps prescriptions filled in Los Angeles like a sacramental fight against the darkness . . . Her name is Monica. She is legion (p. 116).

In the final chapter on death, Smith ties together several themes previously discussed in the book, especially friendship and family. Augustine knew loss. In a span of fifteen years (approx. age 18-33) he lost a close friend, his mother, and his only son, Adeodatus. The last two came soon after his conversion to Christ and before assuming pastoral duties. This Augustine is not yet the great Bishop of Hippo correcting the Pelagians and defending Christianity against the failed Roman empire. This is a young Christian slogging his way through life’s many complexities, wanting more than anything “to know God and the soul.”

And, who can’t relate to this?Throughout, Smith draws on his wide-ranging awareness of contemporary art, literature, film, and music to illustrate human longing, loving, and suffering. Christian or not, Smith believes we’ve all something to gain from Augustine’s story. Not least, we stand to gain clarity about our own stories still unfolding. Throughout the book Smith includes other more recent figures who have also learned from the Bishop, even if they didn’t share his faith. For example, Martin Heidegger, Albert Camus, and Jacques Derrida feature frequently throughout the book as fellow travelers who did more than think. They felt deeply and wrestled with life at every level.

Throughout, Smith draws on his wide-ranging awareness of contemporary art, literature, film, and music to illustrate human longing, loving, and suffering. And, through it all he consistently and cleverly reminds the reader that the journey is not the destination. There is a Telos, and our hearts remain restless until we rest in Thee. Yet, the Telos is also the Way. Quoting City of God concerning Christ, Smith adds, “As God, he is the goal; as man, he is the way” (p. 174).

By way of evaluation, the book is classic Smith with penetrating insight into the human heart and experience and extraordinary creativity in illustration and metaphor. And, while the writing is familiar for students of Smith’s prior work, this book strikes me as even more spirited.I hoped for a chapter on prayer learning from Augustine, Smith, and others how to speak back to God as we journey with, through, and toward him. One gets the sense that Smith isn’t just writing to his contemporary audience of Christians and seekers. He’s writing to Augustine. Sure, he hopes to endear Augustine to his readers, but he’s also narrating his own confessions before God and beside the Bishop of Hippo, thanking him for serving as a personal navigator for the past few decades of education, parenting, sex, ambition, friendship, and loss.

Concerning critique, I’ll mention two briefly. First, the Augustine of Smith’s book is almost exclusively the young, or early, Augustine. Again, this is not the mature Bishop of City of God, On the Trinity, Enchiridion, or On Christian Doctrine. This Augustine is the young man of Confessions books 1-9 who is still almost a decade from the Bishopric. In other words, there’s a lot of story left. I note this as a critique, but not a strong one. Rather, one that I’m quite sympathetic to. Far too many, especially in the academy, only know the “Augustine of ideas,” and not the Augustine of the restless heart who loved and lived so deeply toward God. And, the best introduction to this Augustine is through his early years.

A second critique concerns something absent from the book. The Confessions is a prayer. Through this prayer, Augustine narrates back to God his interpretation of how God has worked providentially in his life from birth to the death of his mother. As such, I hoped for, and would have benefited from, a chapter on prayer learning from Augustine, Smith, and others how to speak back to God as we journey with, through, and toward him.

As noted above, On the Road with Saint Augustine is not a systematic treatment about Augustine or spirituality. Rather it’s a narrated tale of an ongoing journey. Multiple journeys, in fact, including Augustine’s, Smith’s and our own. One should not approach the book looking for a five-step method to better morning devotions. Nor should one expect concrete take-aways or straightforward discussion questions following each chapter. Instead, expect to be slightly uncomfortable reading a book that you feel is actually reading you. Thus, without further warning, I commend to you, “tolle lege.”

Benjamin Quinn (PhD Trinity College, University of Bristol) is Assistant Professor of Theology and History of Ideas at Southeastern Baptist Theological Seminary. His dissertation was on Augustine's sapiential theology. He is the co-author of Every Waking Hour: An Introduction to Work and Vocation for Christians (Lexham, 2016).
All posts by Benjamin Quinn   |   follow on
View Add a Comment
An African Perspective on Miracles and Divine ActionOur Life Is a Prayer Before God
Sapientia RSS
Newsletter Sign-up
More in Book Review See All
More in Human Flourishing See All