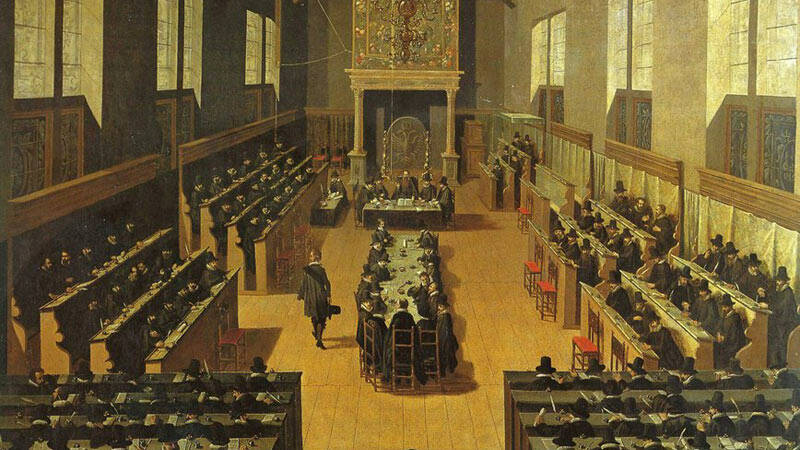 In reading Wright’s response to my essay, it occurred to me that perhaps I did not state my intentions clearly enough. So let me try to be as clear as I can be: I did not set out to write a full review of the book. By no means did I attempt to overturn the main thesis of the book. By Wright’s own account, his “main thesis” was to provide a “biblical argument for the so-called ‘Five Points of Calvinism.’” By my own account, that is simply not what I was setting out to do. 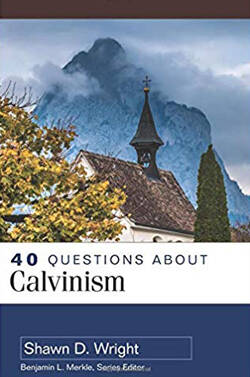 His “main thesis” awaits and deserves fuller engagement. As I said, my task in our engagement was more preliminary and much more focused in purview: I was simply trying to show that Wright’s depiction of Arminianism is problematic, and I followed that with some observations about how certain historical and conceptual misunderstandings occlude the discussion and thus leave the appeals to biblical exegesis unconvincing. But I am sorry that I did not make this intention more obvious.

Wright complains that I “loft innuendo” when I say that “I have no doubt that historians who study the Reformed tradition will find very much to contest in Wright’s account;” he thinks that I  at least should have offered some sense of what those areas of disagreement might be. Fair enough; I was trying to avoid getting into debates about who gets to claim ownership of the “Reformed” label while also signaling that not all historians will be satisfied with his characterization of the Reformed tradition. But I regret saying it this way, and I apologize for any harm done.I refer to such issues as these: the necessity of the death of an incarnate divine person for salvation, the extent of the atonement (especially with respect to the views of John Davenant and others), the pecuniary nature of satisfaction, the variety of perspectives regarding the pactum salutis, the proper understanding of the doctrine of original sin, and, yes, the proper conception of human freedom. For insight into the breadth and complexities of the Reformed tradition on soteriological issues, see Richard A. Muller, Calvin and the Reformed Tradition: On the Work of Christ and the Order of Salvation (Grand Rapids: Baker Academic, 2012). See also Oliver D. Crisp, Retrieving Doctrine: Essays in Reformed Theology (Downers Grove: IVP Academic, 2010); idem, Deviant Calvinism: Broadening Reformed Theology (Minneapolis: Fortress Press, 2014).

Now back to the central issues. I offered a string of direct quotations from Wright that purport to describe Arminianism. I then pushed back and said that these claims do not accurately represent Arminian theology. I noted that his claims suffer from lack of support, and I observed further that it is not hard to find important Arminian theologians who actually deny many of the claims made by Wright. Wright chooses to ignore all but one of the initial claims that I have contested. This initial claim was:

I pointed out that this does not fairly represent Arminian theology. In an attempt to show that (at least) one Arminian believed this, Wright responds by providing a quotation from Jack Cottrell:

(b*) “A will is significantly free only if the choices it makes are not caused or determined, either directly or indirectly, by an outside force…”

Wright says that I am forcing him to “belabor” the point. But fundamental issues rest on this point. And I am afraid that he continues to miss it. The statement by Cottrell does refer to “the will” as if it is the agent (which is an odd locution), but (b*) is not saying the same thing as (b). Nor does (b*) entail (b).I continue to think that it is important for critics of a theological tradition to recognize the complexities of that tradition and indeed to describe it accurately. Wright says that the will is, for Arminianism, free from any influence. But the very statement adduced by Wright in support of his view says nothing whatsoever about influence—Cottrell’s statement is about causation and determinism.

Wright gets this one wrong, but he doesn’t so much as try to address the other issues. Instead, he just doubles down and “stands by” his earlier statements. This is disappointing. I continue to think that it is important for critics of a theological tradition to recognize the complexities of that tradition and indeed to describe it accurately. When a critic misses the mark, the critic should be open to correction. Whether it is a Baptist reacting to caricatures drawn by Orthodox critics or a Roman Catholic setting a Presbyterian straight, such correction can be edifying and healthy. If a critic of historic Reformed theology claims that “Junius believed and taught fatalism,” then this critic needs to be corrected. If a critic of Calvinism says that “Calvinists don’t do evangelism because their theology tells them that they shouldn’t,” then this critic needs to be corrected (at multiple levels). In such cases, the scholarly—and virtuous—thing to do is to accept the correction. I think that Wright agrees on this methodological point—thus I am surprised that he is not at least open to the possibility that he has misunderstood the views of his interlocutors and opponents and thus reinforced caricatures (even if unintentionally). I have offered a half dozen or so examples of Wright’s wrongs. But rather than trying to understand where his statements err, Wright simply insists that he is correct and then fards over the problems by charging me with privileging logic over exegesis. Instead of engaging with the examples of misleading and inaccurate statements that he has made, he says that I am attempting “to ground [my] Arminian views in logic, and to a lesser degree historical theology” while he “attempts to buttress Calvinism by an appeal to Scripture.” But surely we can set this old canard aside as the red herring it is, for I am not attempting to “ground” or otherwise support Arminianism here at all—by “logic” or otherwise. I am only showing that his portrayals of Arminianism are not accurate. Nevertheless, Wright presses on and challenges me to “argue . . . against the Bible’s teaching that persons outside of Christ are dead in rebellion against God (Eph 2:3), cannot be subject to God’s law (Rom 8:7), and cannot come to Christ (John 6:44-45, 66).” But why would I do such a thing? I wholeheartedly agree with the biblical teaching (assuming, of course, that he means that no one can “come to Christ” unless drawn by the Father rather than that no one can come simpliciter). The very fact that Wright thinks that a traditional Wesleyan-Arminian theologian would argue against the Bible here only underscores the confusion that besets the discussion.

Wright charges me with deploying the scholarship of Richard Muller to “prove” my point, and he labels this the “fallacy of the expert.” But careful readers will have observed that I don’t appeal to Muller’s scholarship in this way—in no place do I claim “proof” of any position with respect to the Reformed tradition’s relation to metaphysical determinism (and compatibilism). I only say that “Muller and other historians of doctrine are challenging the assumption that the Reformed tradition is (broadly) committed to metaphysical determinism.” I don’t actually take sides in the debate;I am pointing out it is hard to evaluate claims about biblical support when the definitions are murky. I simply point out that leading historians of the period are challenging the assumption and that it can no longer be taken for granted. I do not say that their challenge cannot be met. I only point out that it is there. That is all.

Moving from the historical concerns to the related conceptual matters, Wright says that I am “free to disagree with Dr. Carson’s perspective.” Of course that it is true, but in point of fact I don’t actually disagree with Carson’s summative affirmations—and that seems to be the very point at which Wright is confused. So, once again, let me state as clearly as possible that I agree with Carson’s summary: “God is absolutely sovereign, but his sovereignty never functions in such a way that human responsibility is curtailed, minimized, or mitigated; and, Human beings are morally responsible creatures . . . ” I don’t think that such a summary is “incoherent.” To the contrary, I concur with it, and indeed I think that Carson has done a good job of summarizing the biblical data that supports these claims. I am grateful to him for his work. But—again—this is not the same thing as compatibilism where compatibilism is understood in the mainstream sense (as the conjunction of metaphysical determinism and human freedom, and as Wright and Carson seem to think it should be).Numerous Reformed theologians and philosophers (including some in the footnotes of Wright’s book) employ the term “compatibilism” in the mainstream sense, and they think that it is theologically defensible. A stellar example of a well-informed theologian who makes a biblical and theological case for “soft” determinism is John S. Feinberg, No One Like Him: The Doctrine of God (Wheaton: Crossway, 2001), pp. 677-714. Moreover, Carson’s biblical arguments do not show that compatibilism (as determinism-plus-freedom) is entailed by the theological claim and corresponding biblical support. I do not disagree with Carson’s summary of biblical teaching; I am pointing out it is hard to evaluate claims about biblical support when the definitions are murky, and further that the theological (and indeed philosophical) conclusions that Carson and Wright want to draw from the biblical data are not demanded by that data.

On “Systems” and “Method”

In conclusion, I note that Wright says that “what matters is the Bible.” I couldn’t agree more. Naturally enough, I think that biblical teaching leads to theological conclusions that are different from Wright’s, but I wholeheartedly agree with him that what matters most is what the Bible teaches. However, to understand how the biblical teaching actually relates to the theological systems—which doctrines are supported and which are undercut by biblical exegesis—we need to know what those doctrines actually are. And Wright’s account of “Arminianism” fails this test.

Tangential Questions About Authority and Method, Not Calvinism | Shawn Wright

Thomas H. McCall (PhD Calvin Theological Seminary) is Professor of Theology and Scholar-in-Residence at Asbury University. He was the Director of the Henry Center from 2012–2020. His recent publications include An Invitation to Analytic Christian Theology (IVP Academic, 2015), and Against God and Nature: The Doctrine of Sin (Crossway, 2019).
All posts by Thomas H. McCall   |   follow on
View Add a Comment
Tangential Questions About Authority and Method, Not CalvinismThe Problem Isn't Science
Sapientia RSS
Newsletter Sign-up
More in Book Review See All