“Who’s afraid of angels, Satan, and demons?” Indeed, angelology and demonology are among some doctrinal loci which unfortunately have not been receiving as many treatments as they should have been in the evangelical academic and popular circles alike, in both Western and Eastern contexts. However, through his second contribution to the Foundations of Evangelical Theology series, Graham Cole masterfully shows that the doctrines of angels, Satan, and demons do matter in how we see the world and how we live in it. 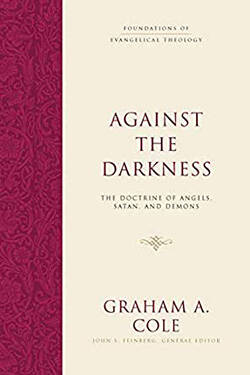 Through this particular book, Cole again proves himself to be one of evangelicalism’s most capable theologians in demonstrating how theology ought to be done properly in serving both the academy and the church. As such, I believe Cole’s work serves as a cultural reminder—even critique—of how theologians and laymen alike have been inadequately dealing with questions related to angels, Satan, and demons (pp. 25–26), most likely due to the influence of anti-supernaturalism of the secular age, especially in the West. This is what Paul Hiebert has spoken of before, namely the “flaw of excluded middle” or the neglect of the “angelic order” (p. 21).

Cole states at the outset his wholehearted commitment to uphold Scripture as the norma normans in doing theology, especially in spelling out the natures and the roles or activities of angels, Satan, and demons—which arguably have been subjected to much speculations and thus become “text-less” doctrines across the ages. In calling his approach an “evidence-based approach,” Cole does not mean to subscribe to the approach of Charles Hodge—who sees the Bible as pile of data to be collected, or even the so-called “dicta probantia” or “proof-texting” approach. What Cole wants to emphasize is the priority of “exegesis (i.e., legitimately reading out of Scripture) [and] not eisegesis (illegitimately read into Scripture)” (p. 20), as well as the commitment to reading the whole canon, i.e., “tota Scriptura” (p. 48). Thus, what Cole has achieved, successfully in my view, is producing an “evangelical systematic theology” that is very much “informed by biblical theology” (p. 21).Graham Cole masterfully shows that the doctrines of angels, Satan, and demons do matter in how we see the world and how we live in it. To summarize, Cole employs the motif of “divine comedy” and places angelology and demonology within the broader context of creation, fall, redemption, and consummation, hence showing how angels, Satan, and demons are related to the doctrines of God, the last things, etc. Any careful reader would not miss this unique and rich blend of biblical and systematic theological themes weaved seamlessly throughout this book.

As for the details, Cole rightly explains that in the beginning, there is no Satan nor his demon minions, only angels (chs. 2–5). Cole covers a wide range of issues from the various kinds of created angels mentioned in Scripture, their spiritual nature compared to human beings (especially how it contrasts with the imago Dei), their heavenly and earthly activities in relation to God and creation, and a number of interpretative debates on the identity of the angel of the Lord or angelophanies (chs. 2–3). In these sections, Cole engages theologians from various stripes fairly. For instance, he considers Dionysius of Areopagite and traces the influence of his speculative idea of celestial hierarchy to Thomas Aquinas, Dante, and Milton, further down to contemporary authors like Peter Kreeft. Cole also mentions some wisdom from Karl Barth, whose treatments of angels are exemplary, and includes some lesser known theologians like Sergius Bulgakov (though Cole himself still sees some speculative elements in both figures). In a similar fashion, Cole continues to elaborate the different scriptural references to Satan and demons in terms of their angelic origin, the primal sin that makes them fall, their roles in tempting and deceiving believers, and most importantly, their minimal mentions within God’s special revelation as losing antagonists in God’s sovereign plan for the world (chs. 4–5). Cole rightly reminds us further of Christus Victor on the believers’ side, whose coming into the world to atone for the punishment of sin on our behalf and to defeat Satan and his minions has been promised to us ever since the fall of man (Gen 3:15), until the “fullness of time” (Gal 4:4), when the incarnate Christ lived, died, rose again, and ascended into heaven to intercede for us (ch. 6). What Christ has done and continues to do for us, consequently, becomes our only arsenal and assurance—that God would supply us the strength to endure the ongoing and depressing spiritual warfare(s) (ch. 7), until the end of time, when Christ restores the fallen world and judges them accordingly (ch. 8).

What I really like from Cole’s book, besides the things mentioned above, is that he convincingly shows that our views of angels, Satan, and demons are in many ways relevant to our doctrines of God, creation, man, sin, Christ, salvation, and eschatology (ch. 9).This, I believe, is theology at its best! Moreover, Cole does not stop only to explain the what, but also the why and the how—namely the entailed implications for our belief and practice of angelology and demonology in our Christian lives (pp. 41–48, 69–76, 102–08, 127–38, 158–62, 191–201, 220–23). Although it is meant as a textbook to help seminarians or academics, Cole is very much sensitive to some of the relevant pastoral issues in dealing with prayer, worship, discerning the spirits (esp. between mental illness and demonic oppression), exorcism, preaching, and encouraging believers in Christ, among others. This, I believe, is theology at its best!

Nevertheless, I believe there is some room for improvement in several parts of this book, especially as it relates to contextualization. In spite of Cole’s awareness of the need to pay more attention to the global south (p. 22), as well as his note on an African perspective on demonic deception (p. 201, n. 159), there is almost no trace of engagement with other global perspectives, particularly in Eastern contexts. In such contexts, there is not only a wealth of resources, but also, phenomenologically speaking, people who are very much interested in how to think about angels and demons (I, for one, as a native Chinese-Indonesian, am sometimes overwhelmed with the number questions asked by people in my former congregations). Furthermore, there is also very little mention of how this evangelical angelology and demonology makes a difference in assessing today’s pop culture, for instance, how to think about horror movies (e.g. Ju-On, Conjuring, Annabelle). One question I often encounter is, “Can Satan or demons take on human lives?,” as is commonly portrayed in those movies. Although we can infer from Cole’s expositions that the answer is “No!,” it would better for him to at least cite some examples to strengthen the book in terms of its relevance to the globalized world. That said, I believe these suggestions of mine are but minor omissions compared to what Cole has accomplished in writing a fine treatment of angelology and demonology for the twenty-first century.