Voice, Vestigia, and the Holiness of the Triune God

I’ve organized my response into a loose series of comments, appreciations, and questions, as I try to begin to take in Katherine Sonderegger’s extraordinary work in this volume. Here, I will comment on 1) her voice in the project, 2) the vestigia Trinitatis, with sex/gender as an example, and 3) the holiness of the Triune God and the divine processions. 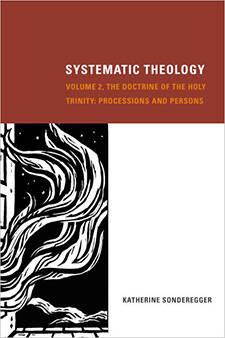 The first matter I want to comment on, and to my mind, one of the most significant contributions of the project, is Sonderegger’s voice. How to begin to capture what she does here? The confidence. The authentic piety. The beyond minimal footnoting while surely and masterfully navigating the whole of the conversation which might, in someone else’s less sure hands, have been footnoted. In Sonderegger’s patent immersion and trust in Scripture, insistent and unembarrassed capitalizations and meaning-folding catenae of clauses, (the language itself echoing trinitarian redoublement?), I hear the voice of the master teacher and the Spirit-led mystic. Sonderegger is doing her own thing, without apology, without confinement by genre, without, it seems, caring what all those Barthians might say. It’s delicious.

I’ve suspected for some time that the ascendence of women in contemporary systematic theology means and marks something important for a discipline which has too long been about power. Today, it is a constellation of wise and devout women, all unapologetic realists—Sonderegger, Coakley, Tanner, Soskice, Kilby, and others—who are doing much of the most daring constructive, systematic, creative work in the discipline, work that dares to question the givens and speak to the church as it is today in fresh ways about the living God.

I wonder if Sonderegger’s voice isn’t a marker of just this phenomenon. Never having been crowned the golden boy, the heir presumptive, perhaps we women know, in our bodies, enough of what Sonderegger sees as the costliness of Christian faith, that we’re set free to pour things out in a way that doesn’t count the cost? Perhaps we have less to lose than do some others, and so we’re being emboldened by the Spirit. Emboldened to speak as we want to speak, emboldened, even, to speculate on the inner life of God, putting to bed the old and dishonest division between mystic and theologian? Perhaps we have a new model of the theologian here, drawn from Mary kneeling at Jesus’ feet, cracking open that jar of nard.

The Possibility of Trinitarian Vestigia

Second, the vexing question of the possibility of Trinitarian vestigia. Sonderregger makes a subtle plea for their existence, even for their existence as ground for the “intellectual dignity” (p. 116) of the doctrine of the Trinity. In the landscape of contemporary theology, this plea is rather startling, even as it is quite a modest one; “the dogma of Trinity and of Creation must not be entirely walled off from one another” (p. 190). Realism itself, Sonderegger argues, is a trace of the Trinity.

If we were to oversimplify and proclaim that every theology of the Trinity leans either on the one or on the three, either on unicity or diversity in God, Sonderegger is clear in prioritizing unicity (a much-needed correction in light of much contemporary trinitarian theology), but unicity seems to me even more resistant than diversity to recognition outside of revelation. Affirming the truth of divine oneness was a long, long road for the people of God, compared to which recognizing divine threeness took only a few centuries. Of the two possibilities, oneness is, I think, the tougher case to make for vestigia. And Sonderegger’s account of vestigia does focus, unlike the rest of the volume, on vestigia to diversity. So, I wonder, are there vestigia to Triune unicity?

I’d love to hear Sonderegger speak more about the relationship between the vestigia and Scripture, which she both names as vestigium (p. 69) while also being perfectly clear that Scripture is more than vestigial; Scripture bears “the sensus plenior, the fullness of the metaphysical Mystery, laid down in the patterns, sinews, verba, and events of this text. The Bible is the fully healed instance of a creature, put in service to the Living God” (p. 268). I’m deeply sympathetic with Sonderegger’s concern that theology not be reduced to soteriology, but I’m puzzled by what seems in places to be a near equation of soteriology with revelation. Perhaps I’m speaking past her, working with different ideas about revelation, but the account of Scripture just quoted would seem to give less to the vestigia than Sonderegger elsewhere gives. Might revelation and soteriology be further separated here? Is revelation always existential, or can it skip the ego, or at least give little attention to the ego, as it reveals the very inner life of God?

Sonderegger takes the problem of sex/gender as one of her examples of vestigia, which she examines under the heading of “diversity in creaturely life” (p. 214). I’m delighted that our discipline is now at a place where feminist questions need not be cordoned off into feminist books but belong in properly theological volumes. Sonderegger assumes this beautifully, as she interacts with Elizabeth Spelman and Dolores Williams in articulating her doctrine of God. While I agree that the doctrines of creation and trinity must meet, I do have questions about sex/gender as vestigium. Sonderegger takes the feminist problem of holding unity together with difference as “akin to the complex known as Trinity” (p. 224), even “a secular parable of the Holy Trinity” (p. 229).

The Holiness of God

Which brings me to my third and final note, one of wide-eyed appreciation of the gift Sonderegger gives us in helping us attend to the holiness of God. As a Wesleyan theologian, I’m shocked that it has never before occurred to me that Trinity just is holiness. Sonderegger delivers this insight, unfolds it again and again.Sonderegger understands the processions as holiness and holiness as the processions. She leads us to the temple, where the smoke sears our lungs and stings our eyes; she calls us to kneel and to enter into the goodness of God; “The dogma of Trinity just is the intellectual affirmation that Being is Holy” (p. 475); “There is something elemental about Divine Holiness that we modern Christians find deeply alien and unsettling” (p. 356); “God is shocking, an Undoing” (p. 359).

Sonderegger understands the processions as holiness and holiness as the processions. Her stated focus on the processions before the persons (and using a lot more words than she does for the persons) furthers her unfolding of the oneness, the unicity, of God. There will be those who ask whether Sonderegger’s leaning on unicity is not a kind of modalism; they will be wrong, for Sonderegger is quite right to define the heresy as a “conceptual inability to recognize the very idea of Procession” (p. 449). And Sonderegger goes beyond recognizing; she sits with procession, dwells with it, helps us to see it revealed in the temple and in the goodness of God.

Sonderegger’s trinitarianism resists those streams which would suppose that “Triune Reality and Equality consist in Super- and Subordination” (p. 251), which for all practical purposes, I’ll equate with any who would deny the eternal generation of the Son. This, to me, is perhaps the most important ethical, political, and feminist affirmation attached to the doctrine in contemporary theology (with my apologies for focusing on something that connects the inner life of God so clearly to human life).

And yet, Sonderegger’s descriptions of the life that is God, of the divine processions, highlight descent and suffering. Now, this is blessedly true of the economy, and I do not doubt that the economy here shimmers with some of the truth of the inner life of God, and yet, to allow even a glimpse of “Rupture” and “Breaking” (p. 335) into that inner life itself seems dangerously near to those who would bring subordination into that life. I trust Sonderegger when she tells us that she does not do this, but I’m struggling to get my mind around the affirmation of descent in the Godhead while rejecting those subordinationist tendencies she so rightly rejects. I want to hear Sonderegger say more, here, more of what it means to claim that, “ . . . Divine Giving, too, is a Rupture, a Dying and a Breaking; it, too, will follow the great Downward arc of the One God in His Mystery and Reserve. The Life of God is costly” (p. 348).

There’s so much more to say, but I’ll leave it here. I love the book’s unapologetic Latinness. I love the digressions about our contemporary society. I’m grateful for Sonderegger’s extraordinary book, for the ways she presses us to think the new in places where other ways of thinking run deep. I’ll be ruminating on her testimony to the holy One of Israel for quite some time.

It was our joy to host a panel discussion on this book, featuring the contributors to this symposium. You can find the video from that event on our resource page. Beth Felker Jones (PhD Duke University) is Professor of Theology at Wheaton College. She is the author of multiple books, including Marks of His Wounds (OUP, 2007), and Practicing Christian Doctrine (Baker Academic, 2014).