It Hath Been Already, of Old Time

The foundational assumption of John Schneider’s book is that Darwinian evolution presents radically new problems for theology, for which his core proposal, which I can address only briefly, is offered as a solution.

Yet of his four “interconnected unveilings,” presented as a “Darwinian problem,” only one arises from Darwinian theory itself, where it is viewed metaphysically rather than scientifically, admittedly a viewpoint Darwin shared. Such doubts warrant a reply, but throughout Schneider tends to accept subjective feelings as facts about nature. 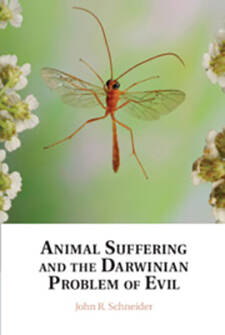 It is my contention that these issues present no genuinely new challenges, and that theologians dealt with them effectively long before Darwin. The real change was that Darwin, raised as a deistic Unitarian, had like many today lost sight of classical theological categories with which to address his doubts. In particular, Enlightenment religion had side-lined special providence, the inscrutable simplicity of God, and Christ as the Logos in and behind all creation. Their replacement with philosophy’s “omnibenevolent moral Deity” raises difficulties that seldom troubled older theologians.“Omnibenevolence” and “morality” are terms absent from the Westminster Confession’s long list of God’s attributes, for example.

In the unfinished final part of The Faerie Queene, two and a half centuries before Darwin, Edmund Spenser riffs on classical mythology, describing how the goddess Mutability sought to rise above earth to rule the Olympian gods, on the grounds that even they were subject to change.

Presenting her case the Titaness, describing how everything is subject to her, pictures creatures flourishing, dying, decaying “unto their earthly slime” and giving rise to new ones,

Unlike in forme, and chang’d by strange disguise:

So turne they still about, and change in restless wise.

Spenser was certainly not prophesying evolution, but the “tragic” viewpoint behind Schneider’s “Darwinian problem” appears identical. Mutability describes the beasts daily “massacred,” and indeed everything in the world constantly suffering alteration “from good to bad, from bad to worst of all.”

Yet the goddess Nature, called to judge the case, rules that things change by “expanding their first estate,” not by losing it, and actually reign over change, rather than being ruled by it. Mutability loses her case, for reasons that recall the gradual shift in modern evolutionary theory towards accepting an active role for creatures through physiologically mediated mutations, niche construction, and other mechanisms beyond passive natural selection.

This reversal shows how facts seen as intractable problems can become signs of divine goodness in a different light. Spenser, the Christian, ends his work with a prayer to share in God’s immutable Sabbath rest, when mutability will give way to eternity and “all things firmely stayed.” Unlike modern writers he does not agonize over how we can justify God in his actions; he is more concerned to receive justification himself in God’s sight.

But is it even rational to measure suffering or pleasure arithmetically? Pain evolved, as Alfred Russel Wallace stressed, to benefit and protect creatures.Alfred Russel Wallace, The World of Life (London: Chapman & Hall, 1910), ch. 19. Most pain in my own seven decades has been of this nature, and mercifully minor. But were I to summate it, perhaps by adding up the action potentials of all my c-fibres over the years, it would no doubt exceed that experienced by the proverbial baby tortured to death. Does that somehow put God more in my debt than the child’s? Clearly not, but how else can one quantify “total suffering”?

In the same way, if one tests the rhetorical impression that evolution entails all creatures suffering dreadfully all the time, no one animal suffers any more than people have observed routinely since they hunted mammoths. Theologians always understood this, or they would have shuddered as much at the sum of animal suffering over Ussher’s six thousand years as Schneider does over geological time. But they would have taken the prodigality of life, not only death, into consideration too.

The second pillar, “the plurality of worlds,” is only a problem if one’s entire focus is anthropocentric, and one interprets Genesis that way. The author mentions, but glosses over, the truth that by Darwin’s time most thinking Christians were untroubled by ancient, previously unsuspected, ages. Even a strict Presbyterian like Robert Shaw regarded the Gap Theory as “the generally received mode,”Robert Shaw, An Exposition of the Westminster Confession of Faith (Faern: Christian Focus, 1992), 62. fifteen years before Origin of Species.

Schneider mentions astronomy’s revelation of the possibility of distant inhabited worlds as part of the problem. But this had been the most stimulating implication of the Copernican Revolution centuries before. Many Christians, like the Puritan Richard Baxter, speculated on the glorious prospect (not the theological stumbling-block) of “all these globes” being inhabited.Jon Garvey, Did the Puritans start the Seti Project? (The Hump of the Camel, 03/02/2011), http://potiphar.jongarvey.co.uk/2011/03/02/did-the-puritans-start-the-seti-project/. The plurality of worlds was known, and accepted by believers as one of the “secret things” not revealed to men (Deut 29:29). They did not argue, as Schneider does, that God in his goodness towards us ought to have explained such things. Indeed, the very fact that he must speculate on a new solution is evidence that God did not wish to.

Even the name of the third pillar, “anti-cosmic micro-monsters,” is pure rhetoric, not science. If, all too topically, we consider viruses, then their greatest detractors admit that they are elegant in form and highly ingenious. But viruses also, under evolutionary theory, make up a large portion of our genome. Far from being anti-cosmic, they are one of the main sources of genetic innovation, according to distinguished evolutionary researchers.Susan Mazur, The Paradigm Shifters: overthrowing the “hegemony” of the culture of Darwin (New York: Caswell, 2015), Part 3.

Pre-Darwinian theologians didn’t know this, and neither did Darwin. However, they did know that, according to Scripture, plagues and pestilences are sent as agents of judgement by God. And they even knew, as theodicists seem not to, that pests can be beneficial as well as malign: they knew that “mini-monsters” like locusts, occasionally devastating, generally keep themselves to themselves, and even (in the case of John the Baptist) sustain human life.

Endo-parasites, too, are not anti-cosmic, but known to be ecologically vital in maintaining healthy populations, sometimes playing a role akin to “sublime” top-level predators. They seldom cause agony, still less extinction, because they co-evolved with their hosts, and rely on their well-being to survive. “Horror” cannot, as Schneider claims, be other than subjective, by definition.

Admittedly they didn’t understand natural selection. But that may also be the case with our author, when he describes it emotively as “inefficient, wasteful and brutal.” We should consider, on the one hand, that modern theory rejects Darwin’s Malthusian viewpoint as indefensibly subjective, and defines natural selection in terms of “differential reproduction” rather than a “struggle for survival.” This correction makes all the difference.  And on the other hand, both the science of ecology and the doctrine of providence consider the whole picture, rather than anthropomorphic speculation about a single creature’s perspective.

If natural selection is viewed, primarily, as conserving species intact, evolutionary change being incidental, then it is highly efficient, for the average duration of a species is five to ten million years, and each member of it benefits. Such “purifying selection” greatly predominates. But even Darwin, focused on transformation, regarded natural selection as almost divinely providential in its constant supervision of the species’ perfection.

As for “waste,” a herring might view the loss of all but a few of its 40,000 offspring thus, but to the porpoises rounding up the shoal, or to the fishermen, it represents abundance. And since the herring evolved for this lifestyle, who is to say it doesn’t regard the non-survivors as “brother whale’s share,” if it cares at all? For to Darwin, even caring must have an adaptive purpose. Far from being a “Darwinian problem” unjust suffering is actually anti-evolutionary, since evolution creates creatures adapted for this world, not the next.

“Brutality” conjures visions of ragged survivors amid a mass of deformed and agonised evolutionary failures. But that is false. Natural selection weeds out a few deformed individuals. The rest live their lives productively, the “fittest” having more offspring because they escape predation, are good at child-care, or just look nicer to females. All of this was observed by naturalists long before Darwin, and even Psalm 104 praises God as the providential arbiter of their lives and deaths.

In any case, natural selection is no longer the whole of evolutionary theory. There is increasing evidence that living things are active agents in their changes, as in their daily life. Who are we to insist they don’t see life as a zero-sum adventure, rather than as a lengthening claim sheet against their Creator?

The Conclusion of the Matter

I suggest that none of these new theological challenges are new. Consequently they certainly have answers in traditional Christian teaching, though that cannot be developed here. The main strength of Schneider’s solution, it seems to me, is that it begins to turn back towards classical theology, by embracing Roderick Chisolm’s abandonment of the nominalist idea of God as “an ordinary moral being.” But in making God, apparently, an ordinary aesthetic being, perhaps he does not go far enough.

He compares God to an artist who deliberately includes ugliness in his composition to make a worthwhile whole. He does so by re-interpreting Job through a novel cognitive lens grounded in aesthetics. But what if Job’s theophany is intended to represent to us what transcends cognition and aesthetics, akin to the final vision of Aquinas, or Pascal’s experience of the God “not of the philosophers and of the learned”?

To traditional theologians, all God’s attributes are perfect, and facets of his divine simplicity. His justice is his mercy, is his goodness and truth and so on, all summed up in love, and imprinted on the fabric of creation through his Son, the Logos we may know personally, but only by supernatural faith.

Thus beauty, too, was to them an objective truth to be perceived (not an aesthetic judgement) arising from the goodness and wisdom of the Creator, rather than from his tolerance of natural evil. The traditional Christian would say that what seems evil to us arises from our ignorance of God’s goodness, truth and beauty as Creator. This accords with the biblical teaching that everything God has made is good (1 Tim 4:4), and that he is of purer eyes than to look on evil (Hab 1:13). And this, too, is the conclusion of the Genesis creation account in Genesis 1:31. Jon Garvey (ThM University of Gloucester) manages a couple of acres of upland meadow in Devonshire and is an elder in a Baptist church. He is the author of God’s Good Earth: the Case for an Unfallen Creation (Cascade, 2019), and The Generations of Heaven and Earth: Adam, the Ancient World and Biblical Theology (Cascade, 2020).