Why Heaven Is Not Just a Better Version of Vegas

How often do you wonder what your personality will be like when you no longer have to think about trying not to be grumpy when you are tired? Have you ever asked what your inner world might be like when you never have to try not to think uncharitable thoughts? Have you ever been tempted to wonder how different your personality will be when all the ways you have been misshapen by the sinful world in which you have lived are wiped away?

To put the question of resurrected life in these terms is to highlight the tendency of the contemporary imagination to assume that the resurrected life will be pretty much like waking up in a nice hotel after a good sleep and a shower. We suppose we will look in the mirror and be happy with what we see, go down to the buffet and fill our plates with endlessly delightful food that never makes us fat, and will spend the rest of the day at the pool and being entertained. For most Christians today, let us admit it, heaven is pretty much a better version of Las Vegas. That this happens should not surprise us, as it is almost impossible not to project culturally dominant images of health and happiness onto resurrection bodies. 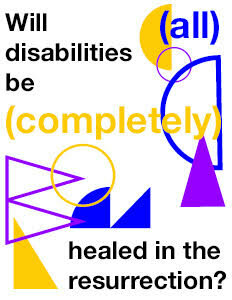 When we think of heaven as basically a better version of Las Vegas we reveal that modern materialist individualism has colonized our imaginations in a manner that dilutes the Christian gospel. Eschatology matters for how we think about disability, and the question raised in this Areopagite is being seriously contested in disability theology at the moment. This is a good thing. There is some excellent new thinking being done on this topic by young scholars like Maja Whitaker and Candida Moss.Maja I. Whitaker, “Perfected yet still disabled? Continuity of embodied identity in resurrection life,” Stimulus: The New Zealand Journal of Christian Thought and Practice 26(2) 2019; Candida R. Moss, Divine Bodies: Resurrecting Perfection in the New Testament and early Christianity (New Haven, CT: Yale University Press, 2019). I’m a bit of an outlier in this academic discussion in attempting to deflate the importance given to the question of the resurrected body. I do so because I think that the Vegas problem is a symptom of a wider deformation of Western theology which I am trying to counter with a call for a more substantively Christological and ecclesiological vision of the kingdom of heaven.

Very early on, Western theology slipped an imagination of the body which was highly materialist in orientation. Augustine comes out of the north African theological tradition in which no one batted an eye when Tertullian spent some energy speculating about what weight and age we will be when we are resurrected, and wondered whether the fat will rise to heaven more slowly than the skinny.Tertullian, On Fasting, Ante-Nicene Fathers IV, ed. Alexander Roberts and James Donaldson (Grand Rapids, MI: Eerdmans, 1979), XVII. Augustine is very much in this north African speculative tradition when he asks in his City of God what size the resurrected bodies of aborted fetuses will be, whether or not all people will be resurrected in a uniform size to an optimal age or with their sexual organs still in place. For Augustine, these are the questions we must ask if we are to take with full literalness the biblical promise that “not a hair will be lost” (Luke 21:18). Augustine seriously wants to explore whether this biblical promise requires the restoration of hair and fingernail clippings and will even apply to people who have been cannibalized.These issues come up in Augustine’s extended discussion of resurrection in City of God, XXII.13-20, a locus classicus in theological speculations about the resurrection.

The problem here is not that these speculations are organized by the doctrine of creation to the exclusion of Christology. Augustine explicitly affirms that the measure of human perfection is the resurrected height, weight and age of Jesus:

So then: all are to rise with a body of the same size as they had, or would have had, in the prime of life. But it would in any case be no hardship even if the form of the body were to be that of a child or an old man, provided that no infirmity of mind or body remained. Thus, even if someone contends that everyone will rise with the same kind of body as he had when he died, we need not devote too much effort to the task of arguing the point with him.Augustine, City of God, XXII.16.

The problem is not even the salutary reserve with which Augustine admits that all such speculations should be held by Christians. The problem is that the Christology and eschatology being assumed here are not social at their root, but individual and physical. In the guise of eschatological speculation, they generate a definition of the proper or normal human by which every human being must be measured at the same time as they project commonsense material definitions of what counts as a healthy human being as pictures of resurrected perfection.

I have found myself defending Jesus’ view against the Western theological preoccupation with resurrected bodies not to suggest that affirming bodily resurrection is not important. It is. What is important if we want to stay true to the teaching of Jesus, however, is that Christian speculation about resurrected bodies, to the limited extent that these may be necessary, must elaborate what Christians believe about redeemed sociality. To work the other way around is to reproduce one of the more problematic aspects of the Christian, or at least Western, theological tradition, namely, its overweighting of creation in its definition of the human to yield a remarkably literalist and materialist understanding of the body.

The current debate between those who insist that all disabilities will be eliminated in the resurrection and those who insist that they will be there in some form has generated some important insights. Ultimately, however, it is the loss of the reserve modeled in Augustine’s speculation that should cause us to pause to consider how close we might be to violating Paul’s sharp warning against excessive speculation about resurrection bodies. “But someone will ask, ‘How are the dead raised? With what kind of body do they come?’ Fool! What you sow does not come to life unless it dies” (1 Cor 15:35–36). Starting from this apostolic enjoinder to reserve, I would like theologians to take more seriously how the debate can be skewed if it proceeds as if Jesus did not have quite a lot to say about what we should hope for and expect heaven to be like.

Hence the real eschatological question is not what it will be like when I don’t have a sore knee or blurry eyes or a missing limb in the resurrection, but what will it be like—what will I be like—when I am no longer impelled by or resisting the defense mechanisms I have developed having grown up in a world full of sinners, which has made me a person who cannot be freely open with and welcoming of others? It is at this point that I think the dominant eschatological imagination in the churches does its greatest disservice to people with various sorts of disabilities. In my book Wondrously Wounded I discuss the reasons why I think my eighteen-year-old son Adam, who has Down’s Syndrome and autism, and is nonverbal, may be closer to his resurrected persona than I am, in being so evidently able, for instance, to not live in regret or hold grudges. Given these aspects of Adam’s life, I have to ask: does it really matter if he has Downsy eyes when he is resurrected? Should I be angry at God if he cannot speak? For now I expect that Adam might be able to speak and might also have Downsy eyes, since most people understand his eyes and face to be the visible markers of the role he played in the story of God with us in our time and place. I can say this because I think Augustine and Tertullian made a theological mistake in becoming so obsessed with imagining that what matters in the resurrection is getting a perfect body.

I know several disabled Christians who have wrestled with their embodied limits in very conscious ways and have come to the considered conclusion that they will not be without what we call their disabilities in the resurrection.Brian Brock, Disability: Living into the Diversity of Christ’s Body (Grand Rapids, MI: Baker Academic, 2021), 34-37; John M. Hull, Notes on Blindness: A Journey through the Dark (London: Profile Books, 2017), 90, 95. I find theologies odious that make bold to tell these disabled Christians that they are definitely wrong. First, it is problematic when theological speculation positions this question as the only question that really matters for thinking well about human bodily flourishing. More fundamentally, such positions unjustly presume that the spiritual work is somehow misguided which these disabled Christians have undertaken in order to come to terms with, and even receive with gratitude, the bodies and minds God has given them.

Fixation on preaching the necessity of a specific form of bodily resurrection appears to strike a pose palpably different from that of Jesus, who had no problem imagining a fine banquet populated by the blind and lame and everyone else. When Jesus began parables with lines like, “the kingdom of heaven is like a wedding,” his mind never seemed to reach for images of physical perfection. Why then do we go to Vegas? When we go there, we need to consider again what we pray when we say “Thy will be done on earth as it is in heaven” (Matt 6:10).