What to Do with This Life?

Jake Meador’s What are Christians For? invites us to seriously consider the world into which we have been born and the challenge of embracing and expressing the Christian faith. It is important note that this is less a matter of making an assertion or accusation, but more a recognition of our current state of affairs:

The problem is mostly not with ordinary Christian people half-heartedly following Jesus and willfully choosing to ignore certain commandments. The American church is filled with ordinary people who love Jesus and seek to serve Him and their neighbors in their daily lives. I have benefited from their kindness and generosity on many occasions. The problem is much more complex than that. It’s the way our vision of the Christian life has too often been implicitly conditioned and defined to leave the characteristic idols of the Western world untouched, unscathed, unchallenged (p. 13).

One of our greatest challenges is being aware of our context. 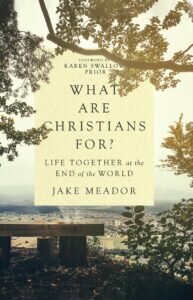 One of our greatest challenges is being aware of our context. We are born into our “contextual water” and we swim in it as if it is “just the way that things are.” Meador, drawing on Herman Bavinck’s work on worldview, directs our attention to the way we think about nature. Do we look at our world as something to be dominated and overcome (in line with Friedrich Nietzsche) or as a gift and inheritance that is to be received, understood, and engaged with love, particularly in the wake of the gifts and challenges of modernity? Were this question to be posed to most Christians we know, the answer would largely be “I throw my hat in with Bavinck.” To such a reply, Meador might respond by asking us to look at the way we approach our lives to see whether our words are matched by our way of life. When I think about the way I have learned to think about the trajectory of life, I am aware that the messages I heard from family, school, and various media sources have often been framed in a way that assumes a certain detachment from God’s world, even when phrases like “engaging the created order” have been part of the rhetoric.

Meador presents an account of this detachment through Willie James Jennings’s The Christian Imagination. The detachment emerges amid colonialism, where the discovery and engagement with “The New World” was characterized by regarding this new place as a commodity to be used and the agents of conquest came to regard their identity in terms of their embodiment. Meador states:

What happens with the conquest of the Americas is a betrayal of the closeness that ought to exist between people and place; the colonialists, whose identity in Europe was closely tied to land, family, and so on, did not seek to inform their identity in this new place in the same way. Instead, they “self-designated,” as Jennings puts it. They chose for themselves what their identity would be, independent of any encounter with this new place they had entered. As a result, the dense web of life found in the Americas was diminished in their eyes, reduced to mere matter (p. 38).

This new approach includes the emergence of the modern concept of race, which placed European rooted persons at the top and labeled other groups inferior:

To be “White” was to be capable of imposing your will onto the world around you through force, to seize what you desired, and to claim the life you wanted. . . . For Europeans, whiteness became an identity to preserve and live into—it was the identity of successful individualists who managed to create identities of wealth, status and power by “projecting meaning into the world,” to use Jennings’s phrase. But for darker-skinned peoples, whiteness became something they were meant to aspire to. Defined this way, whiteness is inclusive: anybody can become “White,” provided they possess the talent and will needed to subdue land and people to their will. Thus maturity—a successful life—came to be defined in racial terms (p. 42).

Life after colonization was detached from an interactive engagement with nature; now it had become a matter not of discerning how to understand and work “with” the natural order but instead to disregard it as a context of God’s revelation and “make use” of it for consumption. For some of us, our forms of engagement may be intended as stewardship, but our tutelage in this “new world” has oriented us more towards “use” instead of working within creation’s limits.

Meador also proposes that we consider the posture of faithful presence presented in James Davison Hunter’s To Change the World. Some readers may know I have tensions with this view because I find it too reserved in a world where the pursuit of significant change is needed on issues such as race and poverty. That said, Meador helpfully points out how this approach can be meaningful in the face of a world where there are real possibilities of being marginalized. In such cases, faithful presence is a posture of steady commitment to our society, working amid those who do not share our faith:

Faithful presence means actual presence. We cannot withdraw from society to preserve the purity of our faith. We live in neighborhoods and work in institutions alongside non-Christian peers. We participate in our the lives of cities and states and nations. To be sure, we do all of this as Christians—and there may come a time when we are not welcome. I myself have been fired from a freelance job because of my Christian beliefs (p. 106).

For certain, in some circumstances, faithful presence may be all that we can do, even if we desire much more transformation of our world.
Faithful presence is a posture of steady commitment to our society, working amid those who do not share our faith.

A word about narrative: I greatly appreciated the many stories in this book, especially the gripping tale of the health crisis of Meador’s father. Like the other stories, it is nicely written, and the use of stories is a good reminder that we have permission to use narrative for those of us who write theology and can be tempted to believe that we should write in a manner that is merely descriptive and sometimes removed from our subject matter.

One of the things I most appreciated about Meador’s work was a form of ecumenical generosity conveyed in the diverse traditions that inform both his account of our current challenges and his proposal for a path forward. There are Reformed, Roman Catholic, Anabaptist, and other traditions at work. This is a truly catholic approach. I want to note and affirm this in his approach because our spiritual and theological formation can often lead us to grant a certain privileged status to our particular tribe and merely grudging acceptance of contributions from different tribes. This is not downplay the significant differences and border issues among the tribes but to highlight the larger point that it is a better path to seek the truth (or proposals for the lived expression of truth) wherever it may be found. God is the source truth and our tribes are imperfect communities that attempt to interpret and express God’s generous revelation to us. It has been a challenge for all of us to “get it right” since Genesis 3; eagerly seeking as much help from a reservoir as wide and deep as possible is an admirable strategy for all of us.

This book invites us to look at our world and consider how one important expression of Christian faithfulness is the pursuit of reconnecting to our places, loving God’s world and seeking the thriving of our fellow image bearers. I am thankful to have read this volume. Vincent Bacote (PhD Drew University) is Professor of Theology and Director of Center for Applied Christian Ethics at Wheaton College. He is the author of multiple books, including The Political Disciple: A Theology of Public Life (Zondervan, 2015) and The Spirit in Public Theology: Appropriating the Legacy of Abraham Kuyper (Wipf and Stock, 2010).