Most of us have no doubt heard that Western theology, due to the influence of Augustine and the Reformers, has fostered a largely “guilt vs. innocence” culture, in distinction from the “shame vs. honor” culture of the ancient world (including the world of the Bible). Often, we hear as well that these two systems are incompatible.

Further, many in the psychological disciplines have documented the toxic effects of “shame” on people in our culture—shame for failure, shame for being a victim, etc. In this valuable book, Te-Li Lau makes the case that these commonplaces and analyses are oversimplified, and should be discarded. He contends that there is a proper version of shame, which actually has important connections to the notion of guilt; and that this version can actually serve a healthy function in the moral formation of Christian people. He has focused his work on four of Paul’s letters: Galatians, 1 Corinthians, Philippians, and Philemon. He sets the background in Judaism and the Graeco-Roman world, and puts his findings into conversation with classic Chinese (Confucian) culture, and with modern Western culture. 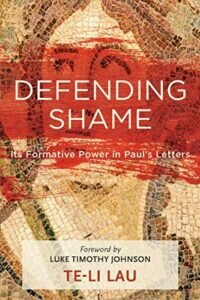 Lau is well-qualified to make these arguments. With origins in Singapore and a first career in engineering (with two degrees from Stanford), he has his theological training from Trinity Evangelical Divinity School (MDiv, 2000; ThM, 2002) and Emory University (PhD, 2008). His PhD thesis began his project, comparing “the politics of peace” in Ephesians, Dio Chrysostom, and the Confucian Tradition. He has taught New Testament at Trinity since 2008.

I recommended Lau’s book for a Sapientia symposium for several reasons: to begin with, because I found it well-argued, thought-provoking, and compelling. It ties in with things that have become clear to me as I have studied the roles of honor and shame in the faithful community, as laid out in both the Hebrew Bible and the apostolic writings. But I also thought that it illustrates how engagement with empirically-gained knowledge—in this case, that of Lau’s home culture—can shed light on aspects of Biblical teaching that we Westerners might otherwise have missed. This kind of ethical and psychological “science” hardly conflicts with the Bible!

It illustrates how engagement with empirically-gained knowledge—in this case, that of Lau’s home culture—can shed light on aspects of Biblical teaching that we Westerners might otherwise have missed.

I have given my own review of this book elsewhere; here I want to let these talented and thoughtful contributors speak. They include a psychiatrist (Winter), an exegete (King), and students of Asian cultures (Jennings and Wu). For all their diversity of background and disciplines, they nevertheless have seen a few things in common, such as the importance of the community as the context for proper shame (and honor), and the contribution of healthy shame to sound moral formation. All of the contributors found Lau’s arguments valuable and largely persuasive; their comments include some mild pushback on a few matters, with some thoughts for taking Lau’s ideas further.My review does so as well.

We finish by allowing Professor Lau the opportunity to reply to the symposium. I am deeply grateful to all of the contributors, and to Professor Lau, for their serious and insightful engagement, from which I have learned a great deal.