Perhaps the most significant theologian in the early “neo-evangelical” movement, Carl F. H. Henry was born to German immigrant parents just before the outbreak of World War I (1913). Raised on Long Island, Henry became interested in journalism, and by the age of nineteen, he edited a weekly newspaper in New York’s Suffolk county. After his conversion to Christianity, Henry attended Wheaton College, obtaining his bachelor’s and master’s degrees (1938 and 1940). Bent on pursuing an academic career in theology, he completed doctoral studies at Northern Baptist Theological Seminary (1942) and later at Boston University (1949). He was ordained in the Northern Baptist Convention in 1941, and from 1940 until 1947, he taught theology and philosophy of religion at Northern Baptist Seminary. 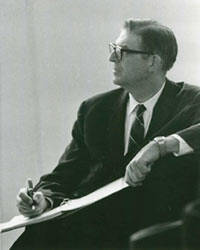 In 1947, he accepted the call of Harold J. Ockenga to become the first professor of theology at the new Fuller Theological Seminary in Pasadena, California. Henry took a prolonged sabbatical from his teaching duties in 1955 to become the first editor of Christianity Today, a publication conceived by Billy Graham and L. Nelson Bell and financed by Sun Oil magnate, J. Howard Pew, as an evangelical alternative to the Christian Century. Under Henry’s guidance, Christianity Today became the leading journalistic mouthpiece for neo-evangelicalism and lent the movement intellectual respectability.

Faced with long hours away from his family, conflicts with Pew and Bell over editorial issues, and criticism from the fundamentalist wing of evangelicalism, Henry resigned the reins of Christianity Today in 1968. After a year of studies at Cambridge University, Henry became professor of theology at Eastern Baptist Seminary (1969-74) and visiting professor at Trinity Evangelical Divinity School (1971). After 1974, he served stints as lecturer-at-large for World Vision International (1974-87) and Prison Fellowship Ministries (1990-).

From the beginning of his academic career Henry aspired to lead Protestant fundamentalism to a greater intellectual and social engagement with the larger American culture. As such, with Ockenga and Graham, he is one of the most significant leaders of evangelicalism of the post-World War II era. In fact, Henry’s book The Uneasy Conscience of Modern Fundamentalism (1947) is often seen as a kind of “neo-evangelical manifesto” marking the nascent movement’s break with separatist fundamentalists. Henry also demonstrated his leadership of the neo-evangelical movement through his presidency of the Evangelical Theological Society (1967-70) and the American Theological Society (1979-80), as well as his organizing role in the Berlin (1966) and Lausanne (1974) World Conferences on Evangelism. 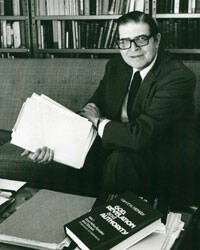 Henry’s magnum opus, God, Revelation, and, Authority, was publisehd between 1976-83.

Henry’s many books, the most famous of which is the six-volume God, Revelation, and Authority (1976-83), consistently reiterate the themes of biblical theism, objective revelation in propositional form, the authority and inerrancy of the Scriptures, and the rational apologetic defense of Christianity.

Paradoxically, Henry has been attacked throughout his career by separatist fundamentalists for urging a more united evangelical witness, while being criticized by liberal evangelicals for his insistence on biblical inerrancy. Despite this carping, the historical significance of the person Time magazine once called in 1977, “the leading theologian” of American evangelicalism is incontestable.