Past Lectures and Publications

The Kantzer Lectures in Revealed Theology is a biennial lecture series, usually lasting a week on the campus of Trinity Evangelical Divinity School, and consisting of between six and eight lectures. These lectures are then revised and turned into a printed manuscript, contracted to be published with Eerdmans Publishing Co.

Perfection and Presence: God With Us, According to the Christian Confession 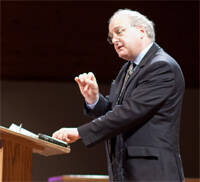 In the inauguration of the Kantzer Lectures series, distinguished Professor John Webster delivers a rich reflection upon the perfections and presence of God.  The question at the center of this lectures series is the nature of human fellowship with God. The Investigation of the nature of this fellowship entails for Webster, a comprehension of the divine perfections and their relation to the Trinitarian relations and missions. From the nature of God, the Trinitarian relations and the nature of Divine presence more generally, it can then be understood more clearly what scripture means when it speaks of the Word becoming flesh.  Webster offers, therefore, an extensive reflection upon the human history of the divine Word and the nature of his presence in the flesh. Finally, Webster moves to discuss the nature of the resurrected and exalted Lord’s presence, a presence manifest in his Lordship over his creatures and in the practices and Sacraments of the holy church.

John Webster (University of Aberdeen) is a notable contemporary British theologian of the Anglican Communion writing in the area of systematic, historical and moral theology. Born in Mansfield, England on 20 June 1955, he was educated at the independent co-educational Bradford Grammar School and at the University of Cambridge. Professor Webster is the author or editor of more than 20 acclaimed books, and a vast number of articles, essays, and papers on a very wide array of themes in modern theology, constructive Christian dogmatics, moral theology, and the nature and interpretation of Christian Scripture. His major publications include:Eberhard Jüngel: An Introduction to his Theology; Barth’s Ethics of Reconciliation; The Cambridge Companion to Karl Barth; Theology after Liberalism: A Reader;Word and Church; Holiness; Holy Scripture: A Dogmatic Sketch. He is also founding editor of the International Journal of Systematic Theology, and an editorial board member of numerous other journals and a series editor for several monograph series.

Special thanks to Tony Reinke for remastering this audio file.

The Election of Grace: A Riddle without Resolution? 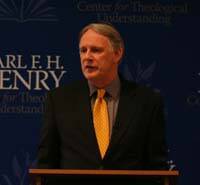 Dr. Williams presented a series of six lectures on Karl Barth and election, with particular emphasis upon the pastoral function of the doctrine. Beginning with a discussion of the issues that arise in debates about election, Dr. Williams details Karl Barth’s view on the topic of election and the related topics of Christian perseverance and particular atonement, including an exposition of Romans 9-11. Dr. Williams then developed Barth’s single predestinarian view and addressed the doctrine of assurance in conversation with Barth’s own views. Taken together, the lectures applied fresh perspective to the views of Karl Barth on the election of grace.

Lecture 1: The Election of Grace: A Riddle without Resolution? | view resource

Lecture 3: The Question of Election As a Determination of Destiny: The Problem of Perseverance | view resource

Lecture 6: An Exposition of Romans 9-11 with a Positive Proposal on Election | view resource

Stephen Williams was born and received his early education in Wales. He holds MA degrees in Modern History from Oxford University and Theology from Cambridge University and PhD from the Yale University. He has held his current position of Professor of Systematic Theology at Union Theological College (Belfast, Northern Ireland) since 1994. Dr. Williams has published in different areas in biblical studies, theology and intellectual history, including Revelation and Reconciliation: A Window on Modernity (Cambridge University Press, 1995) and a volume on Nietzsche, The Shadow of the Antichrist: Nietzsche’s Critique of Christianity (Baker Academic Press, 2006).

The God Who Graciously Elects: Seven Lectures on the Doctrine of God 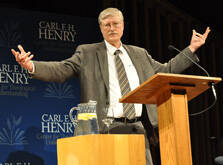 Bruce McCormack presented seven lectures on the doctrine of God, proposing a new Protestant model of the Trinity in its immanent and economic relations. This highly provocative series of lectures engaging some of the most challenging questions in Trinitarian theology today. Dr. McCormack began the series by reviewing the state of play in recent evangelical discussion of the doctrine of God. In subsequent lectures, he then gave a careful analysis of developments in Trinitarian theology in both church history and modern theology. Having set the stage, in the fourth lecture Dr. McCormack probed the New Testament exegetical material relevant to Trinitarian doctrine.   He was then able to lay out, in the remaining lectures, the distinctive features of his constructive proposal for an evangelical doctrine of God.

Lecture 1: Is the Reformation Over? Reflections on the Place of the Doctrine of God in Evangelical Theology Today  |  view resource

Lecture 2: From the One God to the Trinity: The Creation of the Orthodox Understanding of God  |  view resource

Lecture 3: The Great Reversal: From the Economy of God to the Trinity in Modern Theology  |  view resource

Lecture 4: The God Who Reveals Himself: The Mystery of the Trinity in the New Testament  |  view resource

Lecture 5: Which Christology?  Refining the Economic Basis of the Christian Doctrine of God  |  view resource

Lecture 6: The Processions Contain the Missions: Reconstructing the Doctrine of an Immanent Trinity  |  view resource

Lecture 7: The Being of God as Gift and Grace: On Freedom and Necessity, Aseity and the Divine “Attributes”  |  view resource

Bruce McCormack is Charles Hodge Professor of Systematic Theology at Princeton Theological Seminary, where he also earned his Ph.D. Dr. McCormack  also holds an M.Div. from Nazarene Theological Seminary and an honorary doctorate of theology from the Friedrich Schiller Universitat in Jena, Germany. A Presbyterian, McCormack is interested in the history of modern theology, from Schleiermacher and Hegel through Karl Barth. He is a member of the General Assembly committee commissioned to write a new catechism for the Presbyterian Church (USA) and has been a member of the panel on doctrine for the Church of Scotland.

The God We Worship: A Liturgical Theology 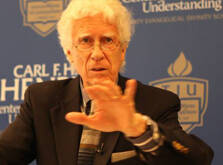 Christian theology comes in many different configurations. In these lectures, Nicholas Wolterstorff will make explicit the understanding of God that is implicit in Christian liturgy, then articulate that understanding. In preparation for constructive project, Wolterstorff will discuss the nature of liturgy in general, and of Christian liturgy in particular, and explain what it is to make explicit what is implicit.

Lecture 3: God as One Who Listens and Speaks | view resource

Lecture 5: What are We Saying When We Say that God Listens? | view resource

Lecture 6: God as One Who Hears Favorably | view resource

Lecture 7: God as One Who Speaks | view resource

Lecture 8: The Understanding of God Implicit in the Eucharist | view resource

Nicholas Wolterstorff (Retired in June 2002) was Noah Porter Professor of Philosophical Theology, and has taught at Yale since 1989. Previously, he taught at Calvin College, the Free University of Amsterdam, and the University of Notre Dame and has been visiting professor at several institutions. He has received many fellowships, including ones from the NEH and the Danforth Endowment. He is past President of the American Philosophical Association (Central Division) and serves on its publication and executive committees. He is on the editorial boards of Faith and Philosophy; Topics in Philosophy; and is also General Editor of the Supplementary Textbook Project of the Christian College Coalition and a member of the evaluation panels for the NEH. In addition to numerous articles, he has written the following books: Religion and the Schools; On Universals; Reason within the Bounds of Religion; Art in Action; Works and Worlds of Art; Education for Responsible Action; Until Justice and Peace Embrace; Faith and Rationality (co-author); Rationality in the Calvinian Tradition (co-author); Lament for a Son; and Keeping Faith: Talks for New Faculty. In upcoming years, he will be the Wilde Lecturer at Oxford University and the Gifford Lecturer at St. Andrew’s University. 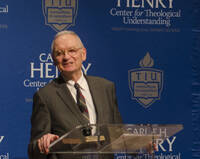 The problem of evil—why is there evil in a world proceeded from Absolute Goodness and ruled by Sovereign Benevolence?—has been the perennial torment of the human mind. Many thinkers have designed “solutions” (theodicies) in which the notion of the possible plays a key role. While common sense readily admits that evil must have been originally “possible” if it arose it the midst of creation, the simplicity of such reasoning is not without its problems. The notion of “possible” is fraught with ambiguities and may be misleading when used uncritically. Concentrating on the “possibility of evil “in the beginning,” and briefly considering the “possibility” of redemption, these lectures in revealed theology will demarcate what deserves to be labelled “evil” and to determine how one should conceive of “possibility.”

Lecture 2: Exploring the Quasi-Concept and the Area of Evil | view resource

Lecture 5: Was evil “possible” before it arose? | view resource

Henri A. G. Blocher is Professor of Systematic Theology, Faculte Libre de Theologie Evangelique, Vaux-sur-Seine, France. Blocher earned a B.D. degree from Gordon Divinity School (1959), a Diplôme d’Etudes Supérieures de Théologie (old doctoral regime), from Faculté Libre de Théologie Protestante of Paris (1974), and D.D. degree from Gordon-Conwell Theological Seminary (1989). He has taught in Africa, Australia, Canada, Europe and the United States. Blocher was involved with the Lausanne Committee on World Evangelisation from 1975 to 1980 and is connected to a number of Evangelical groups and colleges around the world.