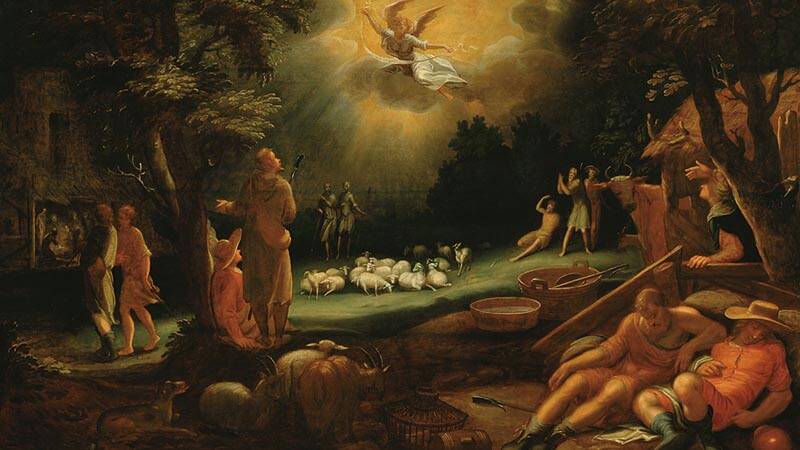 This story, of the angels and the shepherds, opens at night. It is the story of darkness and fright, which ends in exultation and jubilee. Life has many chapters like that, but never has it had any other such chapter as this.

Those shepherds were not strangers to the dark side of things. They had often had fierce combat with wolves; out in the fields at night they had seen many strange heavenly phenomena—eclipses, the aurora borealis, and shooting stars.

Never had they been as alarmed and startled as on this night. These flocks near Bethlehem were not ordinary flocks, else they would not have been out in the fields at the season of the year. They were flocks destined for the temple sacrifices at Jerusalem. The shepherds were watching those flocks; the Greek says, “they were keeping watches over the flocks by night,” indicating that they watched in turns.

While they were in the course of duty, “Lo, an angel . . .” writes Luke, intending to impress us with the sudden and unexpected manner of the appearance. “Lo an angel stepped to their side, and the gloryThere is a strange fear that comes at times into the hearts of men, when they dwell on the divine greatness of the Almighty. of the Lord shone round about them; and they were sore afraid.” The shepherds were terrified. The Greek says literally, “They feared a great fear.”

This fear was more than reverence. There is a strange fear that comes at times into the hearts of men, when they dwell on the divine greatness of the Almighty. Think of God’s attributes: infinite power, by which he called the heavens and earth into being, and by which he moves the stars along their courses in the heavens; infinite wisdom, by which he knows us altogether, in all our failure and moral nakedness; infinite justice, that glows like a devouring fire burning ceaselessly against sin. Small wonder the human mind should find a tormenting misery in the thought of God as an implacable foe.

That night the angel echoed over the Judean hills a song, gladder tidings than which man will never hear. The words were the first evangelistic sermon of the gospel era, and the preacher was an angel. The pulpit was historic ground. On those Bethlehem slopes, on those same hillsides, David of old had fed his father’s flocks, and from those same fields he went forth at God’s command to exchange his shepherd’s crook for the royal scepter, and his lowly dress for the purple of a king. In those shaggy woods and grassy vales, where the pale moon cast its glow over the solemn hills, there rang forth the good news of God’s coming in the flesh:

“Behold, I bring you good tidings of great joy, which shall be to all people. For unto you is born this day in the city of David a Savior, who is Christ the Lord.”

Here was the answer to their fear. Man need not tremble in the presence of his Maker. The Savior is born. God with us: Emmanuel, God made flesh—that is the answer. Here was the good news: The God who fashioned the heavens and the earth slumbered in a manger. In the incarnation, God had taken manhood into alliance with Deity.

When he came, he came to a borrowed manger, as after his crucifixion they placed him in a borrowed tomb. This was the sign vouchsafed to the shepherds:

“Ye shall find the babe wrapped in swaddling clothes, lying in a manger.”

There may have been other children born that night in Bethlehem; none other would have a manger for its cradle.

There is a world of difference in that wording. Peace to men of good will! Peace to men whose hearts are right with God! Peace to men who will identify themselves with God, even as God identified himself with men, in the incarnation. Those humble shepherds were men like that. His birth was first announced from heaven to peasants, for he will dwell only in the humble heart.

Suddenly the hills were silent. All the earth was still, except for the tinkle of a sheep-bell here and there. The song in the night was ended. It had turned the night to day.

Jesus was born! The Savior had come!

“Glory to God in the highest, and on earth, peace to men of good will.”

The Henry Center for Theological Understanding (est. 2006) is located at Trinity Evangelical Divinity School. Our mission is to promote biblical wisdom for the glory of God in all areas of life and thought. The website is run by our staff.
All posts by Henry Center   |   follow on &
View Add a Comment
Rural Ministry in Conversation:
An Interview with the AuthorsEvangelicals and the Canon of Scripture
Sapientia RSS
Newsletter Sign-up
More in Reflection See All