Norman Wirzba’s This Sacred Life is a book about places and people. More precisely, it is about the big questions where we are as humans, who we are and how we should live (p. xiii). Impressed by the serious perils of the Anthropocene (Ch. 1), Wirzba addresses these questions from the perspective of our common creatureliness, that is, our profound entanglement with all other species in a vulnerable and soil-bound life. Hypermodern transhumanist aspirations (vividly described in Ch. 2) display a longstanding discontent with the frailties and limits of earthly life—but it is precisely this earthly life with its natural limitations and potentials that we should embrace and love as a divine gift. 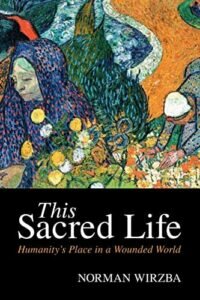 Wirzba writes in an engaging style that appeals to the religious and the non-religious reader alike. Without becoming apologetic, he convincingly points out that it makes a profound difference whether or not one believes that this earthly life is “sourced in and sustained by God” as its transcendent creator (p. 126). If so, this means that we find ourselves in a life-supporting context which is fundamentally good: “Rather than being disconnected, isolated, and insignificant fragments, divinely created creatures are . . . loved from the beginning and are placed within a membership of life that, despite its mysteries and pains, is generative of possibility, growth, and freedom” (p. 132). It also means that every human being is a “child of God” and that the diverse places of this world are “sacred gifts” (p. 132). Indeed, affirming the sanctity of the earthly life in which we all participate is the only option if we want to find a way out of the Anthropocenic crises (Ch. 5). Apart from drawing on indigenous traditions in this connection, Wirzba argues that the creation stories of Genesis provide “a profound articulation of the sacred character of life” (p. 143). Next, turning to an explicitly Christian interpretation of “the logic of creation” (Ch. 6), Wirzba follows Rowan Williams when developing his view along Christological lines: transcendence does not oppose immanence, but the incarnation shows in a supreme way how deeply creaturely existence shares in the divine life. The Pauline notion that the universe is created through Christ “teaches that created life flourishes when it is ordered to, and animated by, the self-offering love he [Christ] embodied” (p. 174).

To me, the reading of This Sacred Life was a very rewarding and inspiring adventure. Indeed, the no less than sixteen colleagues, among whom many ‘celebrities’, who offered advance praise to the book were all right. The book testifies to the author’s great wisdom and there is a lot to be learned from the way in which Wirzba, conversing with past and present philosophers, cultural critics, artists, humanities scholars, and theologians, brings the Christian tradition to bear on the world’s current predicament. Wirzba offers a well-reflected antidote to the current pessimism and cynicism about earthly life that pervades both Christian and secular circles. Moreover, his book is laced with profound insights, articulated in highly quotable one-liners (I must resist the temptation to give examples—the reader will find herself underlining one or two spot-on sentences on almost every page).

At the same time, however, from a theological point of view, the book raises a couple of important questions. Let me mention three of them—the three which I find most pressing.

Second, and related to this, things are often more complex than Wirzba suggests. For example, if all life is sacred indeed, how does this apply to the unborn life? Asking such a question will immediately invoke the culture wars that keep people and places divided. And if all life is sacred, shouldn’t we all become vegans, and/or pacifists? Wirzba does not tell us. But clearly to affirm life’s sacredness is not a panacea that helps us solve all problems. More generally, there is a romantic subtext in this book, for example in the suggestion that things would become much better if only we would exchange our neoliberal capitalist economies for an economy based on the principles of Acts 2:43–47 (p. 241). Yes—but under the present conditions it is not clear how such an economy could actually function; in the meantime, without the neoliberal system in which we find ourselves, even the academic positions which enable us to write our books could hardly be sustained. It is not so easy to elaborate a totally different alternative that will enhance the living standard of many people. Good and evil are so thoroughly intertwined that it is often hard to see how the two can be disentangled. Moreover, apart from the many social and environmental evils, there is also the complexity and perplexity of what is often called natural evil. If God has created and sustains a life-generating and life-supporting world, affirming the goodness of all forms of life, then what about the widespread suffering, death and extinction that is part and parcel of the evolutionary process? Wirzba carefully sidesteps the topic, mostly relegating references to natural evil and suffering either to footnotes or to subordinate clauses which immediately qualify their seriousness. However, talk about creatures who “(potentially) create a beautiful, fragrant, and delectable world” (p. 212) just sounds a bit naïve in an ecosystem that depends on eating and being eaten.

In other words: future-oriented eschatological hope is key to the Christian faith.
Third, I am slightly concerned about the role of eschatology in creation-oriented theological conceptions like those of Wirzba (and, for that matter, Rowan Williams). Should we indeed pin our hopes on the gradual improvement of “this sacred life” by people who—like Etty Hillesum (p. 254)—turn their lives into vessels for receiving and sharing God’s love? Or are we to expect a final act of God in which creation will be judged, redeemed, and healed from its many wounds and brought to its fulfilment? There is no doubt that the latter is the authentic Christian hope. In other words: future-oriented eschatological hope is key to the Christian faith. But today the fear of escapist strategies by Christians who dualistically play off planet earth against the life that is to come can become so dominant, that all eschatological expectation is considered suspect and all emphasis is placed on “this sacred life” (indeed, the “this” has been italicized on the cover of Wirzba’s book). So here is the question which I had hoped to be addressed: how can we do justice to—and derive our ultimate hope from—the deeply eschatological character of the Christian message, without being tempted to ignore our responsibilities for the many concrete people and places to which we belong—and for the planet earth as a whole? Or does Wirzba, despite his incisive critique of Thomas Berry’s naturalism (pp. 156–58), actually side with the latter’s view that our current universe is “the supreme manifestation of the sacred,” so that we do not have to expect a radically new world?

Perhaps I am over-asking, approaching the work of an author steeped in the continental tradition from an analytic and systematic-theological angle. In that case we should not blame the author, who did a terrific job in laying out such a moving and inspiring vision of the good life. Yet, the questions about the status of the earth, the role of evil and the significance of eschatology deserve more attention in theological reflection on the Anthropocene than given here.

I remember watching a news item on Dutch television a long time ago, which was about an impoverished neighborhood in one of our bigger cities that had recently been renovated by a strong financial effort of the Dutch government. The idea was to turn forty of such “problematic districts” into “beautiful districts” and this neighborhood had been one of them. Several of its inhabitants were asked whether the plan had succeeded in their case, and whether their lives had actually been improved and become more convenient now that their built environment had been renovated. I still remember one respondent who hesitated for a moment, and then replied with a grim face: “They should have renovated the people.” I am sure everyone immediately grasped what he meant. Indeed, evil may have become so deeply ingrained in the human species that—while incessantly doing all we can do to improve the conditions of marginalized people and endangered species—we should follow Bonhoeffer in distinguishing between the penultimate and the ultimate and place our ultimate hope elsewhere. Perhaps, at the end of the day we will be unable to free our planet from its many perils, and without giving into escapism we may still have to concede with Heidegger that only a God can save us.