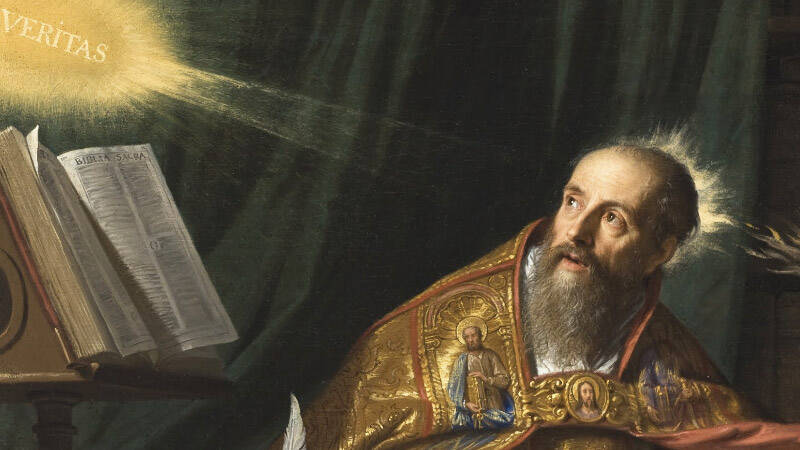 Can the Creation Debates Find Rest in Augustine?

Imagine a young man in his late teen years. He has recently moved to the city to go to school. In the course of his study, he becomes convinced that Genesis 1 is no longer consistent with the most sophisticated intellectual trends of the day. He rejects the Christian faith in which he was raised, giving his 20’s to youthful sins and worldly ambition.

Eventually, he encounters Christians who hold to a different interpretation of Genesis 1, and his intellectual critique of Christianity is undermined. His mother continues to pray for him, and after much personal struggle, he has a dramatic conversion experience.

This is the testimony of St. Augustine (354–430), who was arguably the most influential theologian in history of the Western church. But, in its broad outline, it is a story that seems to replay itself again and again today. The details are different, of course—for instance, our threat comes from naturalism, while Augustine’s came from Manicheism. But the overall scenario is only too familiar to us, especially because today it often lacks a happy ending.

The Doctrine of Creation Was Vital for Augustine

Many people are unaware of the role that Genesis 1 played in Augustine’s conversion, and most would not identify the doctrine of the creation as the high point in his theology. When we think of Augustine, we tend to think of his emphasis on divine grace, or his high doctrine of the church, or his penetrating insights into the Trinity.

But in many ways, the doctrine of creation was at the core of who Augustine was, both as a theologian and as a Christian. Had Augustine not heard Ambrose preach allegorically on Genesis 1 in 384, he might never have come to fight Donatism or Pelagianism. More significantly, he continued to wrestle with the doctrine of creation throughout his life, and it became an integral part of his whole theological enterprise. Not only did he write three distinct commentaries on Genesis, but the doctrine of creation comes up at pivotal moments in what are probably Augustine’s two most important works, Confessions and The City of God.

In all of this, Augustine wrestled with the doctrine of creation at a profoundly existential level. At the risk of overstatement, we might suggest that creation was to Augustine what justification was to Luther, or liberalism was to Barth—that area of doctrine which, because of a theologian’s own personal journey, comes to an especially vigorous expression and is visible in almost everything they wrote.

We Can Learn from Augustine Today

Okay, so Augustine cared about creation. But we should we who are interested in creation care about Augustine? Indeed, isn’t it a mere exercise in academic nostalgia to think that a figure from the 4th/5th century can help us address challenges that are largely related to scientific discoveries of the last few centuries?

To be sure, we should recognize that Augustine was a man of his times. I, for one, am dismayed at his views on women and sex, amused and perplexed at his speculations about dragons and incubi, and baffled by his theories of time and the soul.Because Augustine approached the doctrine of creation prior to the challenge of modernity, his writings can helpfully reframe issues & reorient us to a broader range of concerns. Any “retrieval” of Augustine that screens out the oddities of his thought and age will doubtless be artificial.

Nonetheless, I believe that precisely because of their alien feel, pre-modern theological resources can serve as a helpful stimulus in contemporary theological discussion. Because Augustine approached the doctrine of creation prior to the challenge of modernity, his writings can helpfully reframe issues and reorient us to a broader range of concerns. This is one way to locate avenues of thought that can move us beyond the polarization that characterizes much contemporary reflection on the doctrine of creation.

We must guard against the hubris that all knowledge comes through the iPhone. This is what C.S. Lewis called “chronological snobbery.” Augustine is a staggeringly deep thinker, and we can learn from his wisdom, insight, and sincerity. We may even find Augustine to be a helpful corrective against some of the characteristic blind spots of our own age—a kind a palliative or tonic against those eccentricities of modern thought that are invisible to us precisely because they are so close to us.

A good metaphor for this experience is travelling to a foreign country. How do you know the peculiarities of your own culture until you have visited others? And what generous-minded person would regard a disinclination to learn from that which is foreign as a sign of progress, rather than narrowness?

All this is especially the case with the doctrine of creation. In his lifelong engagement with this area, Augustine displayed a special sensitivity to many of the concerns that are evident in contemporary debate about the doctrine. In the next three posts, I want to isolate three specific ways that I think Augustine can help us.

To whet the appetite, it may be useful to restate something of the story of Augustine that we referenced at the start of this post—but this time in Augustine’s own words:

In Milan I found your devoted servant Ambrose. . . Unknown to me, it was you who led me to him, so that I might knowingly be led by him to you. . . . I listened attentively when he preached to the people. . . . I began to believe that the Catholic faith, which I had thought impossible to defend against the objectives of the Manichees, might be fairly maintained, especially since I had heard one passage after another in the Old Testament figuratively explained. These passages had been death to me when I took them literally, but once I had heard them explained in their spiritual meaning I began to blame myself for my despair.Augustine, Confessions 5.13-14, trans. R.S. Pine-Coffin (New York: Penguin, 1961, 107-08).

Gavin Ortlund (PhD Fuller Theological Seminary) is the Senior Pastor of First Baptist Church of Ojai. He was a 2017-18 Henry Fellow of the Creation Project. He blogs regularly at Soliloquium, and is the author of several books, including Theological Retrieval for Evangelicals, (Crossway, 2019), Anselm's Pursuit of Joy (CUA Press, 2020), and Retrieving Augustine's Doctrine of Creation (IVP Academic, 2020).
All posts by Gavin Ortlund   |   follow on &
View Add a Comment
Witches: African or American?We Must Disobey Unjust Rulers
Sapientia RSS
Newsletter Sign-up
More in Rooting the Faith See All
More in Creation Project See All