What Does Pepperell, MA Have to Do with Mpeketoni, Kenya?

Right off the bat, let me acknowledge that Stephen’s book was immensely helpful to me as I reflected on, and revisited, many past experiences I had as I was being forged in the fires of rural Kenya. In addition, his book currently holds the distinction of being the most “marked up book” on my shelf. Many thoughts came to my mind as I read Pastor Stephen’s book, and I am thankful to God for him.

Stephen, recognizing that his book may end up in the hands of “rural pastors or church members in Guatemala, Italy, India or Ethiopia,” invites us “to consider carefully our own place and context using the categories and approach he employs” (p. 14). As a Kenyan who has many years of experience teaching rural pastors, I will oblige. Stephen offered his book to us with the hopeful aim that it would “prepare the way for more work to come” and I am optimistic that my comments on his book will stir up our minds on some potential next steps. 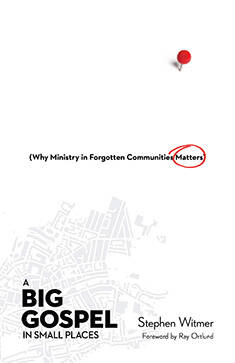 I am starting off with some encouragement and disclaimers because I recognize that there is a primary audience for whom the book was intended. That audience is not, as far as I can tell, an African audience. It is therefore necessary to do some boundary spanning and hand holding even as I make my comments. My intention, as I have said, is to encourage towards next steps, and I hope Stephen hears me in that. In fact, his work with “Small Town Summits” (STS) is so similar to what I am currently launching in rural Kenya by way of “Communities of Practice” (CoP’s) for pastors that I have half a mind to invite Stephen to Kenya and have him share some of his experiences. We have been gathering small groups of rural pastors, in their contexts, to discuss issues related to the church, their lives and their communities. We may even reflect together on his book in these meetings someday in the future. But, as my title suggests, what does Pepperell have to do with Mpeketoni, a rural town in Kenya? What will Stephen have to think about before he speaks in rural Kenya? Will the content of discussions and issues raised in the STS be the same as those he will encounter in the CoP’s?

On the issue of population, the situation in Kenya (and other parts of the world) is unlike that of the USA and I wonder whether we should thus question the whole premise of Stephen’s “small place theological vision.” Stephen lays out a strong case for what “rural places” look like in the USA. Indeed, I resonated with the descriptions he offered in part one of his book. The descriptors he offered do reflect some of the realities in Kenya’s rural areas. However, when I carefully considered my Kenyan context, I found that more people in Kenya live in rural than in urban areas. The 2019 census in Kenya established that sixty-eight percent of the people live in rural areas, and seventy-five percent of the entire population are below thirty-five years old. Mind you, these statistics reflect pre-Covid times. There is a wave of people who have now left urban centers and moved back to rural Kenya because they have lost their jobs in the cities. This has increased the rural populace even more.

By “considering place” as Stephen urges us, this picture (where the majority are in rural areas) does not align with Stephen’s definition of “small places” as referring “to countryside and communities that are relatively small in population, influence and economic power (p. 22). In fact, what is considered a small place in the USA is actually a big place in Kenya. To some extent, I do feel that it is unfair to “read Stephen with Kenyan lenses” but I only do so in order that, in his next steps, he may stress test his thoughts in the light of global Christianity, and the truth of the fact that the Global South is where Christianity is growing rapidly. Stephen offered his book to us with the hopeful aim that it would “prepare the way for more work to come” and I am optimistic that my comments on his book will stir up our minds on some potential next steps.

In his defense, it’s not as if Stephen is unaware of global trends. He alludes to them (pp. 5,19–22) and I suspect given a chance he can elucidate his thoughts on what it means to be a global Christian. One question stuck with me when I reflected on the statistics issue: Does Stephen want the US audience to focus on the “small places” because they are small or because they are included in God’s all-encompassing mission? If one begins to “tug at the population string as from a Kenyan perspective” (Part One) does his appeal for establishing a “small place theological vision” (Part Two) lose force and perhaps unravel the rest of the book?

In other words, if the reality in many places of the world is that the population is greater in rural areas, is Stephen’s small places theological vision robust enough to hold its own in those places? If the “small place” in the USA is actually the “big place” in other parts of the world, how are we in the global South to read his book? If when Stephen speaks about “population loss” (p. 49), many people in Kenya and even globally would respond by saying “what we see in our rural areas is ‘population gain.’” Does that mean the second part of the book is not important? How would Stephen use Kenyan population statistics to argue for a theological vision there?

So, what if for whatever reasons, the population in the US shifts in favor of the rural areas such that the “small place” becomes the new “big place”? Would Stephen then make the case that we should now target towns because they are now much more depopulated and therefore unstrategic because of their few numbers? Perhaps this scenario will never play out here in the USA, but it is my reality in Kenya. Far from being merely a thought exercise, in my context, what is actually strategic is to target the rural areas and all school going students because they reside in the rural areas and are the majority of the population.

Which now begs the question: why and where should we “go” at all? Should we go to the small and neglect the big or to the big and neglect the small however the context defines them? Is population that significant an aspect to consider? My reading of Stephen’s book is that we should go wherever God sends us, whether to the big or small places however the context describes it. Quoting Roth, Witmer avers that “because God loves people everywhere, he calls his church to be present everywhere. Thus, his church must be in places big and small in order to be the church” (p. 82). This then is one of the benefits of reading Witmer from a global perspective. The initial population statistics don’t seem to agree with global realities, but the awareness that there is such a thing as a difference in “places” might be one step towards engagement with diverse areas both in the USA and globally.

The recently adopted 2020 Standards for Accreditation by ATS (who accredit theological schools and seminaries in the USA and Canada) alludes to a need for member schools to “demonstrate global awareness and engagement . . . helping students respect, engage, and learn from global perspectives and sources, understand the global connectedness . . . and increase their capacities for service and learning in globally interconnected contexts” (Standard 3.4). As a learner from the “majority world” studying in a US school that seeks to form me as an “aware and engaged” individual, I see Stephen’s work as a model of how to begin a conversation in my context. His insights into what “small places” look like in the US context, raises the question in my mind of what “small places” look like in the global context. The benefit of thinking this way is that, like Stephen, I can embark on building a theological vision of my own that is based on current realities. This will hopefully inform my priorities and practice as I seek to build up God’s kingdom. Anthony Wainaina Njuguna (PhD., Trinity Evangelical Divinity School) is the Director of Operations for ART. He has been involved in rural ministry in Kenya for many years.