The Art of Ars Vitae

I’ve always been amused by the fact that the nineteenth-century art movement Impressionism got its name from a satirical review of Claude Monet’s painting Impression, soleil levant (Impression, Sunrise). Louis Leroy created a fictional dialogue between observers of the painting, having one of them say that “a preliminary drawing for a wallpaper pattern is more finished than this seascape.” But the artists themselves were not offended. They took on the name Impressionism as their own, and no one in the art world has looked back since. 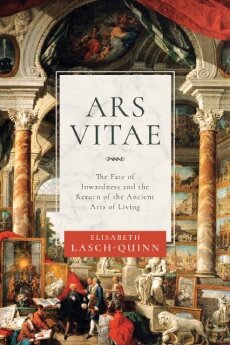 One could say of Elisabeth Lasch-Quinn’s book that it is just as shamelessly impressionistic—and also by design. The four different ancient philosophical lenses through which she reads contemporary American culture feel a bit like rough sketches of a subject in motion. We’re not meant to get a complete picture, but a sensory impression of how some ancient philosophical ideas are alive and kicking today. The lenses work especially well when she discusses popular films. The Matrix is inconceivable without the Gnostic worldview that engendered it, and Eat Pray Love is as Epicurean as it gets. One measure of the power of her method is the fact that after I finished each section, I found myself thinking “wow, I didn’t know I was such a Stoic! I mean, an Epicurean! I mean, a Platonist!”This held true for every category except Gnosticism, since I’ve spent my whole career fighting its appearance in contemporary culture.

It is an undeniably good thing to be reminded that we should call “popular culture—from movies to internet sites—what it really is: popular education” (p. 13). Because ideas have consequences, we are all being enculturated to live in a certain way, and that way is largely dependent upon what we pay attention to. We usually make these choices unconsciously, and that is what gives them their power. We all habitually expose ourselves to certain ideas. The question has always been which ones.

The fact that we are all being unconsciously formed by something accounts for the necessity of Lasch-Quinn’s starting point. She begins with Philip Rieff, who argues that, above everything else, contemporary American culture is a therapeutic culture.Philip Rieff, The Triumph of the Therapeutic: Uses of Faith after Freud (Wilmington, DE: Intercollegiate Studies Institute, 2006). Lasch-Quinn engages with Rieff profitably throughout Ars Vitae. Instead of cultivating personal virtue for the public good, we pursue private happiness. While the therapeutic seems to be in accord with the Socratic teaching that the “unexamined life is not worth living,” it is actually proof of the loss of authentic inwardness. “Rieff thought the therapeutic—the psychologizing of all aspects of our lives in a way that elevated the self’s needs and desires as supreme—eclipsed inwardness and obscured deeper sources of fulfillment and meaning” (p. 11). The therapeutic culture makes a lot of promises that it has no ability to fulfill. It gives us slogans on coffee cups in the place of contemplative practices that could lead us to the good. This is, of course, also Alasdair MacIntyre’s starting point.Alasdair MacIntyre, After Virtue: A Study in Moral Theory, 3rd edition (Notre Dame, IN: Notre Dame Press, 2007). Absent any kind of larger moral framework—including agreement about what the good is and why we should pursue the virtues—these coffee-cup virtues remain a private matter of individual achievement. As a society we get no closer to solving our problems.The therapeutic culture makes a lot of promises that it has no ability to fulfill.

Lasch-Quinn does well in each of the “New . . . ” sections to illustrate how the ancient philosophical movements have been drained of their moral content. The original Epicureans pursued virtue, especially prudence, not just experiences for their own enriching benefits. The strongest case she makes for this draining is in her discussion of the New Cynicism. Whereas Diogenes and the early Cynics believed that there is truth out there to be found and spoken, the New Cynics try to live entirely by rejecting various false stories of the purpose of human existence without accepting any as true. The lack of a moral dimension is why Foucault, for example, turns the art of living into the “technique of living” focused primarily on one’s individual autonomy, a “conversion to self” that would have been unintelligible to any of the ancient schools on offer here. It is freedom with no telos beyond freedom itself. The fact that individual autonomy seems to be America’s highest value made this sentence of Lasch-Quinn’s my favorite in the book: “That a way of life devoted solely to the freeing of the individual actually deprives people of the sources of freedom of self-creation, which is a moral endeavor, is the bitter irony of our age” (p. 234). Indeed.

Whose Love? Which Reality?

The first, and in my view, most glaring, is in her treatment of Aristotle and the New Aristotelianism. Instead of meriting its own section, the subheading “New Aristotelianism” has two pages that are designed primarily as a foil to the Platonism she prefers. This is an odd treatment for a philosophical approach that is currently animating even the most critique-based of disciplines, literary studies.Most surprisingly, the Marxist critic Terry Eagleton, whose book After Theory is just the beginning of that movement. Furthermore, without Aristotle we get no Aquinas, and his massive effort to argue that Aristotle’s ideas lead us right to the incarnation—the very content of the Christian faith, not just an abstract idea or form. Lasch-Quinn barely mentions Aquinas.

Perhaps she avoids Aquinas because the pre-determined Christian content—the idea of special revelation, for example—is offensive. But one could argue that it is exactly this content, or something like it, that is necessary to define (and then live by) the good, the beautiful, and the true. Her treatment of Augustine reveals the nature of the problem. Yes, Augustine was a Platonist in that he believed that the point of philosophy was to find the true by pursuing it with love. But his differences from Plotinus merit much more attention. In her section on Augustine’s Confessions, Lasch-Quinn writes that Plotinus’s “notion of oneness never gives up the reality of loss, longing, and pain. It is a state of mind that is at once yearning, suffering, and searching, and yet deeply reverent, grateful, and liberated, able to lose itself to an incomparable love that is neither all body nor all mind but a strange blend of the two. This love is all that is truly real” (p. 307). Lasch-Quinn seems to offer this final sentence as the main thing that Augustine got from Plotinus. But Plotinus’s notion of love for oneness is vague and, well, Platonic. Grateful to whom? Liberated how? On the contrary, love was not vague for Augustine. Love is from God, for God is love. Giving love the content of God takes the inherent restlessness out of the search for the good. It also leads us to be able to order our loves, the beginning point of any working out of the problem of the one and the many, and the I and the Thou

But let me be very clear: none of this actually defeats Lasch-Quinn’s main goal for the book. She argues convincingly for the need for an authentic search for truth in a culture that is not currently so engaged. We should indeed become Platonists on that score. And if I can be so bold to say it, I think what this book does best is make an argument for the arts as the ideal entry point for that search. Lasch-Quinn concludes her study with an insightful discussion of the 2007 film Once, by far the most artistic of the films she treats, and (I’m embarrassed to point out) the only one I had not seen. I watched it on her recommendation and it does not disappoint. The film proves what Flannery O’Connor argues, that “a story really isn’t any good unless it successfully resists paraphrase, unless it hangs on and expands in the mind.”Flannery O’Connor et al., Mystery and Manners: Occasional Prose (New York: Farrar, Straus and Giroux, 1969). 108. This film defies our culturally-constructed expectations for the “boy meets girl” plot. It insists that art uniquely draws us into deep contemplation of what exactly it means to live the good life—which is what Lasch-Quinn most wants.

In short, the art of living well requires our consideration of new possibilities, new ways of seeing our problems. The arts are thus indispensable. I completely agree with Lasch-Quinn:

This book serves as a wakeup call to our increasingly technocratic culture: the art of living well is an art, not a science. It is time to attend deeply to the arts, contemplate their truth, and grow.