James K. A. Smith has been in the business of “translation” for many years. He translated Jean-Luc Marion’s important book The Crossing of the Visible from the French (1991), helping English readers gain access to Marion’s profound phenomenology as he applied it to painting, icons, and our imagistic culture.

But Smith has much more often engaged in a different sort of translation: helping thoughtful people outside the academy understand the shape as well as the stakes of contemporary philosophical discourse. This work of translation is especially evident in the series Smith edited for Baker Academic, “The Church and Postmodern Culture,” which consisted of nine volumes published from 2006 through 2015. This series included Smith’s own Who’s Afraid of Postmodernism?: Taking Derrida, Lyotard, and Foucault to Church (2006) and Who’s Afraid of Relativism?: Community, Contingency, and Creaturehood (2014). Smith demystifies and defangs the specters of these “isms” and converts them into tools to be placed into the hands of faithful Christians for the shaping of more genuine faith.

Smith probably gained his greatest accolades among Christians for his “Cultural Liturgies” triptych (Desiring the Kingdom: Worship, Worldview, and Cultural Formation [2009]; Imagining the Kingdom: How Worship Works [2013]; and Awaiting the King: Performing Public Theology [2017]). These volumes explore the ways in which practices shape our affections and therefore function as liturgies. You Are What You Love (2016) further translated and condensed this key contention of Smith’s for a general Christian reading audience. 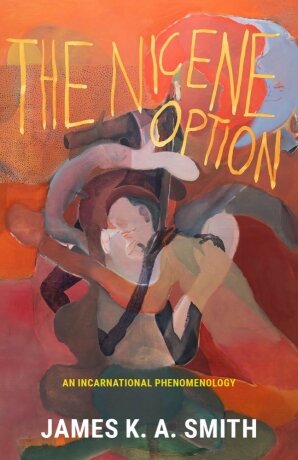 The Nicene Option: An Incarnational Phenomenology, by contrast, showcases Smith’s chops as an academic philosopher. Smith has gathered essays, articles, and chapters from various prior publications and strung them together to sustain an argument for an “incarnational logic” to take its rightful place within the discipline of philosophy of religion.

Readers of Smith’s aforementioned translation work will find much here that is familiar. The volume manifests his trademark emphasis on practices as more deeply formative than mere thought. We also find his broad apology for the use of postmodern philosophy in deconstructing modernism. The book also evinces Smith’s love for Augustine as a timely source of philosophical and theological retrieval. Charles Taylor’s account of secularity and of social imaginaries make their regularly scheduled appearances, too. Yet, as Smith notes in the foreword, this volume is different. Here Smith leads us to encounter Levinas and Marion, Kierkegaard and Nietzsche. We are also introduced to the Jewish thinker Franz Rosenzweig, whom Smith holds forth as representative of a more properly “incarnational” aesthetic than the Catholic Marion can proffer. We reckon with Rorty and Heidegger and Husserl along the way.

But most of all, The Nicene Option is fascinating as documentation of Smith’s career-long tangle with Jacques Derrida, and with Smith’s Doktorvater John D. Caputo’s reception of the French deconstructionist. Smith’s earlier Jacques Derrida: Live Theory (2005) reads as a sophisticated appreciation of Derrida while Derrida was still alive. Who’s Afraid of Postmodernism marches Derrida’s legacy straight into the contemporary church shortly after Derrida’s death. But here in The Nicene Option, Smith spends chapter after chapter in sharp disagreement with Derrida. The volume manifests his trademark emphasis on practices as more deeply formative than mere thought. As you work your way through the volume, it becomes clear that Smith is concerned to rescue Derrida from Derrida, and quite often this entails an attempt to rescue Derrida from Smith’s own teacher, Caputo. The process is fascinating and the results are convincing.

Smith sets the stage with an introductory essay on the necessity of philosophy of religion to attend not just to the structure of beliefs, but also, and primarily, to those of practice. Religion, Smith maintains, is not primarily about thinking but about feeling in the service of doing. It’s not just the church that gets this wrong, but scholars of religion. Smith brings a sane corrective.

We are also introduced to the continental-analytic divide in contemporary philosophy—a gulf that Smith thinks can and should be bridged, if not exactly obliterated. It seems that this is yet another work of translation that a younger Smith explored as a potential academic career trajectory. As it turns out, his translation energy has been spent mostly on building bridges between continental philosophy and the contemporary church. From my perspective, he chose a wise and fruitful course.

From there, the bulk of the book is “a principled critique of . . . problems internal to Derrida’s thought” (p. 66). Time and again, Smith draws the surprising conclusion that Derrida is not too postmodern for Christian faith, but rather that he is not postmodern enough to help yield a fully incarnational theoretical framework for Christian thought. Smith finds Derrida’s allergy for the particularity of specific religious traditions to betray a decidedly modernist allegiance to totalizing universal structures. Derrida is guilty of appropriating, for example, the messianic structure of the Abrahamic faiths in service of an inevitable but vague universal messianism that excludes the possibility of any particular forthcoming messiah. Derrida is shown to be a utopian figure committed to an eschatology that will never come about because it is, in Derrida’s telling, always “to come.” Derrida is too Kantian for Smith, attempting to circumscribe religion within the strictures of reason alone—allowing space only for a pure religiosity distilled out of and distinguished from the particular impure religions on offer. Derrida’s religious impulse, Smith shows us, amounts to a hope without any particular content, except perhaps for an always-to-come democracy that embodies an always-out-of-reach justice-to-come. This utopian justice, distinguished from the particularity (and inherently violent impurity) of law, Smith demonstrates, obsesses Derrida to the point that all applications of ethical principles to particular situations are seen as so many cold and structurally unjust calculations. In the final analysis, Augustine is for Smith the more faithful deconstructionist, while Derrida remains too captive to modern instantiations of metaphysics, epistemology, and ethics of which the Bishop of Hippo blissfully and advantageously knew nothing.

What emerges from the varied studies within The Nicene Option is a broadscale call to embrace the embodied, contingent, traditioned, responsible, able-to-love human person as a created and celebrated good with the potential for true glory as she is incorporated into Jesus Christ. Smith begins by pointing out the necessity for a more incarnational attunement within continental philosophy of religion. But he ends by returning to his even earlier teacher, the late philosopher James Olthuis, who believed that “God is love, and humans are made in God’s image. Love, then, is who we are—love’s agents. God is the giver, we are the gifted, love is the gift. God is the caller, we are the called, love is the calling” (p. 233). For Smith, we can know others, and do right by others, insofar as we are enabled by Christ to love others in their particularity while simultaneously protecting and affirming their irreducible otherness.

Smith has dedicated much of his career to serving the church in its mission to bring salt and light to a postmodern culture, and in doing so he has indeed expressed what he calls in this book an incarnational phenomenology. The church does not know it by that name, but that is precisely what it has acquired through Smith’s work. It is an indispensable contribution. While The Nicene Option shows us many of the roads Smith has not ultimately taken in various trajectories of academic discourse, it also shows us with great sophistication the richness of what we as a church in the postmodern world have gained from Smith’s service to us.

In the end, this book hangs together much better than many similar collections of previously published writings by academics. A handful of typos that passed through the copyediting process detract little from an ultimately cohesive and compelling volume. It could be that a more appropriate subtitle might have been *Toward* an Incarnational Phenomenology, as the book by its very nature is a bit less methodically programmatic than advertised. One is tempted to wish that Smith were superhuman and could have afforded to chase down all the academic-philosophical achievements that are clearly within his sights, while not failing to provide the voluminous works of translation for which he has chiefly become known and celebrated within the church. But this would be to wish for an excarnated, brain-on-a-stick version of Smith, and that would not do.