Who believes in the will anymore? And what kind of will do they believe in?

The word will should puzzle moderns more than it does. Instead, we tend to strip it down to its barest most uninteresting expression, “choice,” which (to speak generally) may be the one thing we’ve all agreed upon to respect, or at least not to interfere with, hence our silence at the altar of will-as-choice. But is this all there is to it, or is “the will” more complex? To make a choice certainly qualifies as an act of the will; but choice is not the only thing the will is about. Or at least not for Augustine. 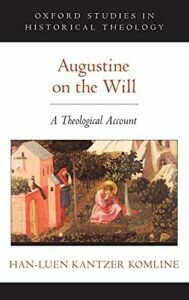 For him, “the will” (voluntas) is a beautiful, troubling mystery. Though at times he defines it simply and directly, even there we encounter so much else going on around it, it’s hard to pin down where it ends and begins. Then we come across gems like this in Confessions: “If there are as many contrary natures as there are wills in someone beset by indecision, there will be not two wills but many [plures].” Many! Evidence that will-as-choice won’t cut it for Augustine.

The Augustinian “will” is not to be seen as a weapon, a sword we can wield and swing willy-nilly. That image belonged to Pelagius, who spoke glowingly of the virgin Demetrias who “cut off with the sword of faith, that is, her own free will” all worldly temptation and distraction. Handy as that sword would have been for Augustine—and maybe he once thought he had used it, pre-AD 396—he couldn’t stop digging into the backstory of will. He couldn’t ditch the sense something more was at play; and for those interested in what he discovered and when, one can do little better than Professor Kantzer Komline’s excellent book, Augustine on the Will.

As I read it, I kept revisiting my misgivings about will-language. Augustine has a word voluntas which we translate as “the will,” but is this word up to capturing the Augustinian reality? The English word conjures up an isolated entity, a power, or a faculty, that precedes what it effects. It isn’t the site of important things about us, and is usually ignored until it fails to do our bidding (like a car’s engine). This leads me to an initial question for Professor Kantzer Komline. In two places she cites John Cavadini’s article on “the self” (p. 17 n. 7, p. 430 n. 22). For Cavadini, today’s studies of the Augustinian self tend to smuggle in an overdetermined modern conception of the self, ignoring the term’s absence in Augustine’s ancient Latin. Cavadini’s fear is that we’re chasing our own shadow in Augustine. Might this also be the case in our search for the Augustinian will?

Kantzer Komline commits herself to contextualizing the will, anchoring it in Augustine’s specific sources and concerns.Yet perhaps our wonderful author is on to this problem. Without rejecting all reference to “the will” in Augustine—it’s in the title, after all—Kantzer Komline commits herself to contextualizing the will, anchoring it in Augustine’s specific sources and concerns. It turns out the will is not one thing across the corpus. It isn’t a faculty suspended over reality—even if, in places, Augustine can sound as if he’s saying that; I agree he sometimes does! But over time, responding to different events in the Christian story, Augustine arrives at what Kantzer Komline calls “a theologically differentiated conception of the will” (p. 87 and passim). By this, she means “will” becomes theologically integrated, indexed to a richer and much fuller Christian narrative. It comes to matter to Augustine where we are in the divine story; for it is this story (and only this story) that can make intelligible our experience of will. Questions of will become for him, then, increasingly, questions about God’s actions, God’s prerogatives, God’s commands, and only secondarily about our choices, desires, and capacities. Odd enough for any modern to consider let alone accept, this trajectory prompts the question: what is the reality Augustine summons us to consider?

Among the many helpful ways Kantzer Komline addresses this question, one passage caught my eye and invites brief comment. It comes early in the context of Augustine’s wrestling with the origin of evil (unde malum?). Readers sometimes forget that Confessions book 7, which records Augustine’s famous “turn to the Platonists” and “intellectual conversion,” begins with a reflection on evil’s origins and nature. This was the issue that disturbed him early on, driving and keeping him in the Manichees’ company. Yet thanks to the Platonists and the preaching of Ambrose he would realize this question was the wrong way to go. He was seeking evil’s cause where no cause of evil existed. Instead, he found a will—his will, in fact—that was twisted away from God in a weakened and enchained state, cowering in the shadows of fear, shame, and self-deception.

So why does the human will—his will, my will—first twist itself away from the God of our heart? The answer Augustine arrives at is as disturbing as it is (initially) unsatisfying: there is no reason. It makes no sense. There is just the will to do it, nothing more, nothing less. Or as Kantzer Komline comments: “Human beings are not really attracted to something greater than God; they are pursuing a chimera. The will serves as a kind of placeholder, then, for describing the mysterious roots of actions that transcend the explanatory power of reason” (p. 51).

What does it mean to call the will a “placeholder”? Here the suggestion seems to be that will is, in some sense, not Augustine’s last word here. Or it is the last word if we’re chasing evil’s origins; but its invocation isn’t meant to end our interrogation of evil, but to re-route it, re-establish it, reframe it, so that something else becomes evident in the naming of evil. It’s as if Augustine wants to tell us: our problem—and the Manichees exemplify it—is we want to interrogate evil without interrogating ourselves. We want to discuss evil as a problem, just not our problem, and so we go about framing it in a way that leaves us out of it: excluding the will which is ours from the problem. We abandon the crime scene only to return to inspect it, and find there only God as the possible perpetrator. A clear-cut case, right?

We want to discuss evil as a problem, just not our problem, and so we go about framing it in a way that leaves us out of it.If this is accurate—if the will marks a new line of questioning for Augustine—then what we might say, more positively, that the will “holds in place” is a turning point and starting point to that most Augustinian practice: confession. In other words, if “the will” doesn’t solve the problem of evil, what it does do is invite us to re-claim our position in it: to re-occupy our place in God’s narrative and “God’s sight” (in conspectu Dei). The will becomes (to use Simon Harrison’s phrase) our “way in” to a process of conversion, in which evil becomes a problem that must be worked on from the inside-out, our agency kept in the picture. In this way, it is our gateway to confession, not just guilt; and through confession, to authentic freedom in the sight of God’s mercy.

Though Kantzer Komline gives limited attention to Confessions itself (surprising, in my view) this work surely marks a high point in Augustine’s early trajectory. In Confessions he launches his conception of a “narrative self” (Brian Stock): a self whose constitution unfolds in confession, and whose personal history, unlike for Plato and Plotinus, becomes a site and source for discovering divine wisdom. Everything he labored for on behalf of the will finds fulfilment in receiving God’s grace in confession. Kantzer Komline’s summary of this development is a good one: whereas in Augustine’s earlier works “the will served the primary purpose of securing moral responsibility and maintaining an appropriate distinction between divine and human agency,” in later writings “the will serves as a conduit for receiving God’s grace and maintaining God’s powerful influence on human agency” (p. 268). But the crucial point in both cases, it seems to me, is that the person has to be there present in the will (whatever “in” means or entails—see below) both to claim responsibility and receive God’s grace; and this is what a work like Confessions seeks to model.

Indeed, Augustine’s deepest insight into the mystery of will is that it comes to us not by seeking it, wielding it or asserting it, but by (re-)receiving it as a gift from our Creator and Redeemer. As he asks at the start of Confessions book 9: “But where through so many years was my freedom of will? From what deep and hidden recess was it called out in a moment?” And his reply is that humility opened the door to his freedom. Freedom, it turns out, is only found in surrender, confession, not by exercising a choice whenever time and mood suits: “Thereby I submitted my neck to your easy yoke and my shoulders to your light burden (Matt 11:30), O Christ Jesus ‘my helper and redeemer’ (Ps 18:15).”

Freedom, it turns out, is only found in surrender, confession, not by exercising a choice whenever time and mood suits.To return to my original query: the trouble that comes with targeting the will in Augustine is that it resists this narrativization of the will-experience. Kantzer Komline observes that the term “the will” (voluntas) serves mainly to substantivize a dynamic and complex process, “willing” (p. 266). To speak of the will is to specify an (obvious) aspect of willing; but the danger is that we come to invest this aspect with its own reality, as if behind every act lurks an indifferent will-to-whatever, a sheathed Pelagian sword always standing at the ready. Part of what has vexed scholarly debates on the will in Augustine (and this goes for the wider tradition as well as modern studies) is this tendency among interpreters to abstract the will from willing. Or indeed in Augustine’s tendency to speak as if it were abstractable, divorced from all the other aspects that shape and ground our agency.

But if Augustine is at his best as more of a “dramatist” than a “theorist” of will (to use Jim Wetzel’s fine distinction), readers may need to rethink what we think about when we hear, read, invoke, and examine the Augustinian will. We may need to follow Professor Kantzer Komline’s advice by including the Augustinian heart—and, I add, the conscience—in our assessment of Augustinian willing. For the heart (more than the will) resists our efforts to pin it down, and this resistance may better place us to map and narrate the Augustinian agent, exposing those mysterious roots for contemplation and confession. I seem to recall one other person who thought this way too. He said, “For where your treasure is, there your heart will be also.”