Beginning this academic year, Geoffrey Fulkerson will be the Director of the Carl F. H. Henry Center for Theological Understanding. 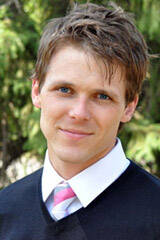 Fulkerson is the center’s third Director, following the leadership of Douglas Sweeney, and most recently, Thomas McCall. “These are big steps to follow in,” Fulkerson commented. “Doug and Tom are exemplary scholars, churchmen, and individuals. I’m blessed to have learned from them, known them, and worked for them.”

Fulkerson is also eager to carry on the work they began. “Remarkably, this little center has had such a global impact—a testimony both to its leaders, our faculty, and the institution,” he commented. “I’m grateful for the opportunity to continue the work already begun.” The Henry Center has officially existed for nearly 15 years, seeking to “bridge the gap between the academy and the church” by providing a center for evangelical collaboration. Most recently, it has been actively involved in a project on the doctrine of creation, called the “Creation Project.”

McCall and his family–wife Jennifer and children Cole, Josiah, Madelyn, and Isaac–have moved to Lexington, KY, where he will be Professor of Theology and Scholar in Residence at Asbury University. McCall has served as a professor of Biblical and Systematic Theology at Trinity Evangelical Divinity School for the past 15 years and Director of the Henry Center for eight of those years. “Dr. McCall has been a sterling contributor to the mission of Trinity,” I’ve been continually impressed by Tom’s ability to guide the church theologically—in truth, in humility, in biblical fidelity, and even, patiently, in disagreement.Dean Graham Cole commented. “He will be greatly missed.”

During his tenure at Trinity, McCall established himself as a widely regarded scholar. Even more than his academic accolades, Tom is recognized for his unique combination of collegiality and intellectual rigor. “I think of him as one who both encouraged colleagues and was vigorous in his quest for precision as it pertains to our truthful speaking about God,” commented Joshua Jipp, Associate Professor of New Testament. Another faculty colleague, Dana Harris concurs: “He is not afraid to challenge positions with which he disagrees, but he is equally concerned to do so with a fair and irenic spirit.”

Fulkerson notes the same irenic spirit as the most significant asset in his directorship of the Henry Center. “The skill-set of an academic is often not the same as an administrator, nor are the skills of an administrator necessarily what are most urgent for guiding ecclesial institutions,” says Fulkerson. “During my time working with Tom, I’ve been continually impressed by his ability to guide the church theologically—in truth, in humility, in biblical fidelity, and even, patiently, in disagreement. These intellectual virtues are so urgently needed, and, I think, crucial for healthy evangelical institutions. I’m grateful for Tom’s theological leadership.” Fulkerson aspires to maintain that same irenic spirit in the future of the Henry Center, in its various boundary-spanning initiatives.

Fulkerson’s curriculum vitae provides a unique blend of administrative and theological competence. He has training and significant experience in communications, program design and management, and systems thinking. He was also instrumental in the writing, design, and execution of recent Templeton grants, totaling more than 7 million dollars and funding the current Creation Project. Academically, Fulkerson earned a PhD in Systematic Theology at TEDS, where his research focuses on the interdisciplinary topic of spatial and topological (i.e., place) theory. His first book, a collection of essays co-edited with colleague Joel Chopp on science and the doctrine of creation, will be published in March, and he has been invited to give lectures on technology (EPS), geography (Calvin College geography department), and the task of interdisciplinary collaboration (ASA). This combination of practical and theoretical knowledge also situates him well both to think theologically about administrative responsibilities and to lead theologically orientated initiatives addressing the pressing challenges that confront our contingently located church.

“However much respect I have for our previous Directors, I also recognize that the Henry Center was never about them,” Fulkerson notes. “This was true during both Doug’s and Tom’s tenure, and that certainly won’t change now. The Henry Center exists to support TEDS faculty in our collaborative partnerships addressing the pressing challenges of our day. And there are no shortages of problems in the church, the academy, or the world. I pray that God’s grace and blessing might be upon us as we together seek fidelity in the church and unity and charity in our witness to our transparently fractured world.”