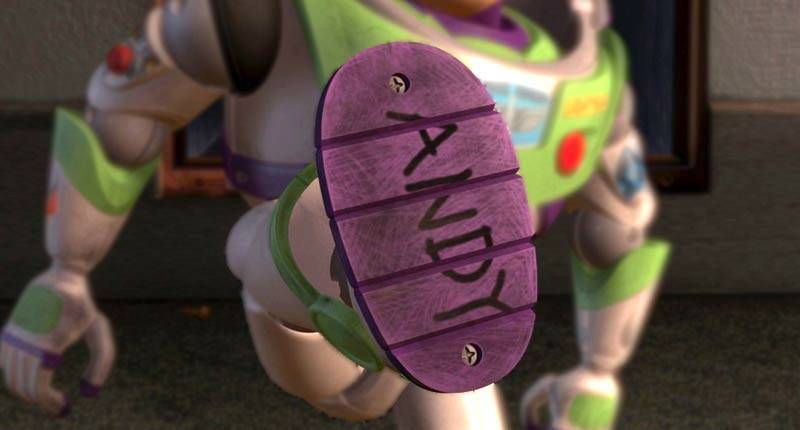 Buzz is still deluded, thinking that he is a space ranger whose sole purpose is to defeat the evil Emperor Zurg. So when he is marked by Andy’s name, he doesn’t fully understand the meaning. But the significance of this moment is not lost on Slink and Rex. He acknowledges Buzz’s permanent acceptance through the name but is so caught up in being useful he forgets what the name on his boot means for him. They’re impressed. At the sight of “ANDY” on Buzz’s foot, Rex even exclaims: “With permanent ink, too!”

In Toy Story 3, Andy’s toys believe that they are confronted with a conundrum: choose to be Andy’s or to be played with. As Andy prepares to leave for college the toys think they will either be thrown away or placed in the attic—neither of which they’re excited about. Mr. Potato Head even wonders if not existing might be better than the attic, than not being played with: Choosing utility over identity, Andy’s toys lose both. “Andy doesn’t want us! What’s the point?” Woody commits to being Andy’s, whether that means going to college, the attic, or the trash; the other toys commit to being played with at Sunnyside Daycare.

Through union with Christ through the Spirit human beings participate in the victory of his disemboweling of sin, death and the devil.Here I’m thinking of Johann Agricola’s vivid sermons on Colossians, especially his description of Christ as a mongoose: “Christ encrusted himself in muck and  the one and only Son of God became man, acting just like other people. Then the devil scurried to him, playing with him like a cat with a mouse. The devil showered misery over him, wanting to recapture the records of debt, death opens its throat, seeking to swallow him, the poor little worm. Christ remains still, waiting for the game to end, when he enters death’s throat, then he tears apart death’s jawbones, knocking out its evil teeth, drilling through its stomach and killing it” (Graham Tomlin, ed., Philippians-Colossians, Reformation Commentary on Scripture New Testament 11, 194). Having died with Christ, put to death whatever is earthly in you (Col 2:20-23; 3:5-11); having been raised with Christ, clothe yourself in him—his identity and works (Col 3:1-4, 12-17). Through this obedience comes true freedom. “As Son, Jesus brings a new freedom,” Joseph Ratzinger reminds us. “Not the freedom of someone with no obligations, but the freedom of someone totally united with the Father’s will, someone who helps humankind to attain the freedom of inner oneness with God.”Joseph Ratzinger, Jesus of Nazareth: The Infancy Narratives, 120-21.

Todd R. Hains is a PhD student in historical theology at Trinity Evangelical Divinity School and assistant project editor of the Reformation Commentary on Scripture (IVP Academic). He and his wife, Veronica, live in Chicago's Humboldt Park along with two large, pathetic and hungry cats.
All posts by Todd Hains   |   follow on
View Add a Comment
Working for the Lord in all thingsJubilee and Lamentation: Foundations
Sapientia RSS
Newsletter Sign-up
More in Film See All
More in Theology & the Arts See All