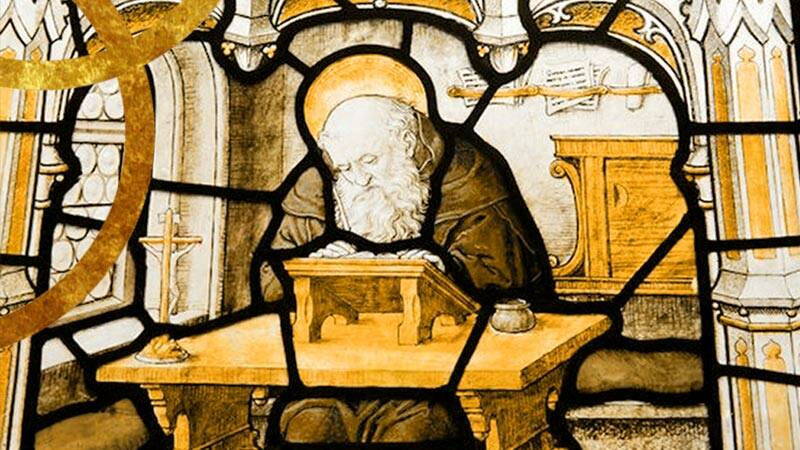 Learning from missteps is often just as important as having exemplars to emulate. The Venerable Bede offers contemporary readers some of both when it comes to interpreting Genesis 1.

Relatively little is known about Bede’s life in Northrumbia at the Wearmouth-Jarrow monastery; we don’t even have a monastic rule from Bede’s time. While some have attempted to reconstruct Bede’s monastic life and others have attentively gleaned details from Bede’s writings, the best primary source biographic material we have comes from Bede’s own, albeit brief, comments on his life at the end of his Ecclesiastical History of the Ango-Saxon People. “From the time I became a priest until the fifty-ninth year of my life I have made it my business, for my own benefit and that of my brothers, to make brief extracts from the works of the venerable fathers on the holy Scriptures, or to add notes of my own to clarify their sense and interpretation.”Bede, Ecclesiastical History of the Anglo-Saxon People, Bertrand Colgrave, trans., (New York: Oxford University Press, 1999), 5.24. In short, Bede’s life, like many other monks, was focused on devotion and obedience to God through teaching, learning, and writing, which included reading, commenting on, and teaching the Bible from within the Christian tradition. His commentary on Genesis should be understood within such a situation. However, that situation should also be broadened out to include the tradition that Bede stood within when reading Genesis, and, for our purposes here, getting clear on that tradition is important.

Bede and the Genesis Tradition

Bede’s commentary on Genesis, On Genesis, is a synthesis of preceding commentaries and Bede’s own thought and foci. Bede also discusses creation at length in On the Reckoning of Time, though his interests diverge from his biblical commentary. As with much of his work, Bede was primarily concerned with teaching and training monks and priests, so he often wrote for an audience that was limited in theological training. Remembering that audience is important for interpreting Bede’s view of creation insofar as it helps us understand why he might not offer interpretations as sophisticated as Augustine.

Another important aspect in understanding Bede’s commentary hinges on his view of the literal and allegorical senses of Scripture. Bede introduces the distinction in On Genesis commenting on Gen. 1:1 where he says that God’s creating took place in the Word—that is the Son—citing Colossians 1 as well. However, immediately following this reading, Bede issues a caution: “But it must be carefully observed, as each one devotes his attention to the allegorical senses, how far he may have forsaken the manifest truth of history by allegorical interpretation.”Bede, On Genesis, Calvin Kendall, trans., (Liverpool: Liverpool University Press, 2008), 68. Thus, Bede views the literal and allegorical senses as antithetical. One leaves the literal or historical when one begins allegorizing; it’s a zero sum game as it were. Bede says, “And there was morning and evening one day” is “without a doubt a day of twenty-four hours.”Here, Bede departs from Augustine who reads the creation of heaven and earth as taking place within the Son/Word as the literal sense, since any empirical, descriptive reading ends in theological or philosophical incoherence.

Bede’s commentary on creation is not always easy to parse. At places he appears to follow Augustine on how to read the literal sense, but at others he departs from him. For example, like Augustine, Bede clearly affirms that finite, human language is inadequate to grasp God’s act of creating. “Hence it is well said that In the beginning God created heaven and earth, in order that it may be clearly understood that he did both simultaneously, although it could not be said simultaneously in human language.”Ibid. Italics in original to indicate biblical quotations. Furthermore, Bede also follows Augustine reading God’s speech in Genesis 1 as non-corporeal; God didn’t utter audible words to create. Yet, even after discussing the simultaneity of God’s creating heaven and earth and that God did not literally (physically) speak creation into existence, commenting on verse five Bede says, “And there was morning and evening one day” is “without a doubt a day of twenty-four hours.”Bede, On Genesis, 75. Bede then goes on to explain how this all could work before the sun and moon were made. It is precisely here that Bede gets himself into a conundrum that Augustine avoided regarding the literal sense of Genesis 1.

Since we now know that the earth is older than a few thousand years, the results of such a literal reading places contemporary Christians in a difficult situation, but, it seems to me, that such a conundrum is the result not of the rise and refinement of the natural sciences but of how we read the biblical text. For example, due to his rendering of the literal sense, Augustine is not in a similar bind as Bede in his reading of Genesis 1. In other words, there might be other ways to read Genesis 1 according to the literal sense that don’t ask us to believe the earth is six or seven thousand years old. Comparing Bede with Augustine is instructive insofar as we see there are other (traditional!) options that don’t require the reader to jettison substantive theological claims in Genesis 1 if we take a different view of the text’s literal sense.

Did Creation Begin on March 18th or does Language in Genesis Lack Referents?

In order to perform such a reading in the way of Augustine, a more sophisticated philosophical and theological reflection would be necessary. While this isn’t the place to go into great detail on specifics, we can draw distinctions in the kinds of language we use to talk about Genesis 1, as well as kinds of language the text itself might be deploying. Here, by “kinds of language” I don’t necessarily mean genre. While accurately noting a passage’s genre is helpful, I have in mind more philosophical distinctions, but these distinctions are rooted in the ordinary, first order speech we commonly use. For example, we use words and phrases all the time to discuss important events and issues that do not have physical referent; we do this even in historical or descriptive writing and argumentation, which we often take to be literal. We talk about the “Reformation,” “Modernity,” or “Benedictine monasticism.” When we use such words people usually know what we mean; that is, we successfully communicate with them. However, what would the referents be for those examples? What could one point to for “Modernity?” or “Benedictine Monasticism?” We can imagine pointing to examples or instantiations of each, but not modernity or the Reformation as such.

My point here is not to march down the road of skepticism regarding our use of language; it’s precisely the opposite. Since we actually do substantively, usefully, and even truthfully communicate using language that lacks referents, we ought to consider how language in the opening chapters of Genesis might be functioning in similar ways. Perhaps due to his pedagogical focus, Bede doesn’t seem as attentive to this possibility as someone like Augustine, and we’d do well to learn from Bede’s missteps and ponder the profundity of Genesis 1’s language and theology and what it might be trying to tell us about ourselves and God.For a more detailed argument of what I’ve laid out here, see chapter 3 of my Allegorizing History, 64-91. There, I discuss the difference between Augustine and Bede in terms of their theologies of nature and grace.

Timothy J. Furry (PhD, University of Dayton) is Instructor of Religion and Philosophy at Cranbrook Kingswood Upper School in Bloomfield Hills, MI. His overarching research interest works toward retrieving ancient figural modes of reading Scripture for our contemporary situation in intellectually persuasive ways. He is the author of Allegorizing History: The Venerable Bede, Figural Exegesis, and Historical Theory.
All posts by Timothy Furry   |   follow on
View Add a Comment
Fruitfulness Comes through DeathThinking Biblically & Theologically
Sapientia RSS
Newsletter Sign-up
More in Rooting the Faith See All
More in Creation Project See All