As part of our continued partnership with IVP Academic and the Reformation Commentary on Scripture series, we’re pleased to publish this interview with Reformation scholar Herman J. Selderhuis. He was the editor of both volumes on the Psalms in the series, and we are grateful to him for allowing us to wrap up our series on Christology in the Psalms in this way.

Can you tell us a little bit of the background to this project? How did you get involved with the Reformation Commentary on Scripture? Why did you agree to the project?

HS: As a follow-up to the Ancient Commentary on Scripture series, IVP started to organize a similar series on the Reformation. I was invited to become a member of the editorial board, which I gladly accepted as I found it a wonderful project. I then also took upon me the task of editing both volumes on the Psalms. The reason for this was first that the Book of Psalms has always been dear to me, and second that I had already worked with much enthusiasm on Luther’s and Calvin’s commentaries on the Psalms. 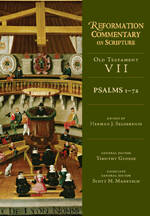 Between the two volumes, how long does a project like this take? What did the process look like as you chose selections from Reformers across various theological traditions?

HS: I must say that there have been times that I wondered why I took this task upon me, as it proved to be a massive load of work to find the right texts, especially as you begin to look beyond names like Luther, Bugenhagen, Musculus, and Calvin, and then translate them. Since the series should also reflect exegetes from the humanist, Anabaptist, and Catholic traditions, the search became more interesting but also more time-consuming. But, the people at IVP have been a great help all throughout the process and their support made finishing the two volumes a pleasant enterprise.

Calvin, Luther, and others have praised the Psalter for its universality and Christological importance. What is it about the Psalms that has captivated the hearts and minds of biblical commentators throughout church history?

HS: I think the secret is best expressed in Luther’s statement that in the Psalms we look into the hearts of believers. The Psalms contain the whole spectrum of spiritual emotions: they speak about the individual believer as well as about the church, about life and death, and above all about the God who is near to us but can also be so far away from us. The Psalms just have it all.

Was there anything that surprised you in your work on this project? A particular angle or emphasis in their commentaries that you did not expect?

HS: Maybe it was surprising that there were for me no surprises. There is great harmony and consistency in the way that not only all Reformers, but also commentators from the Catholic tradition explained the Psalms. There is not much polemical debate but rather a whole lot of pastoral care, and a constant message of comfort for the people of God wandering through history towards the final destination. 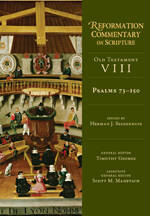 In what ways did the Reformers interpret the Psalms differently than we do? What can we learn from their example? What is the value in learning to read the Psalms with the Reformers?

HS: What counts for the Psalms counts in fact for the whole series, which is that we can still use so many of the insights of the Reformers. We can learn from their mostly careful listening to the Hebrew text and from how they manage to connect every psalm with the person and work of Christ and with the heart of the believer. The way the Reformers explain the Psalms is not any different from the way we do it, and it better not be. Of course, circumstances differ, and we have gained some more knowledge about Hebrew grammar, but the heart of the matter is still the same.

How has this project benefited you, your scholarship, and your appreciation for the Psalms?

HS: Going through all these commentaries, lectures, and sermons I learned more than I was able to put into these two volumes. The most significant profit I had from this project was a deepening of my understanding of the Psalms through listening to all these wise voices from the Reformation era. I can only hope—and in fact I expect—that readers of these volumes will have the same experience.

Thanks again to Dr. Selderhuis, as well as to David McNutt and his team at IVP for their good work in producing this Reformation Commentary on Scripture series.