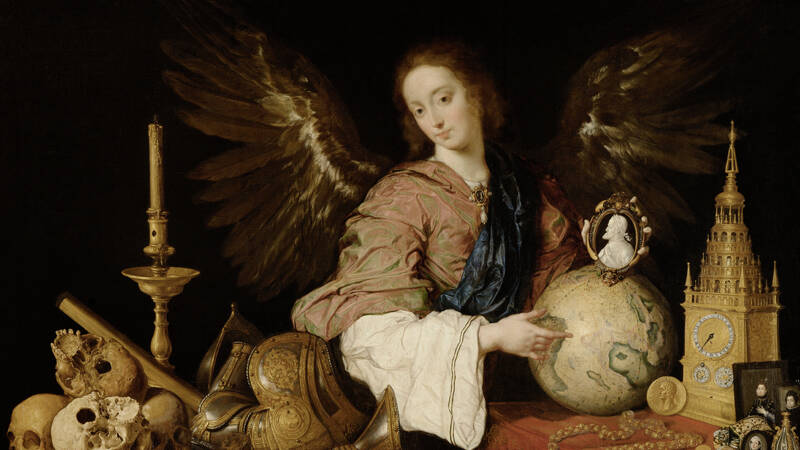 Last week we looked at the book of Proverbs, which basically teaches that, all things being equal, if you live according to wisdom everything will work out. However, the wisdom literature of the Old Testament contains its own counterbalance to the optimism of Proverbs. Job teaches that it’s not as simple as that—things can go wrong for entirely different reasons. And Ecclesiastes says, “So what? You’re going to die anyway.”

The Teacher of Ecclesiastes presents himself as one who has achieved great things:

4 I increased my achievements. I built houses and planted vineyards for myself. 5 I made gardens and parks for myself and planted every kind of fruit tree in them. 6 I constructed reservoirs of water for myself from which to irrigate a grove of flourishing trees. 7 I acquired male and female servants and had slaves who were born in my house. I also owned many herds of cattle and flocks, more than all who were before me in Jerusalem. 8 I also amassed silver and gold for myself, and the treasure of kings and provinces. I gathered male and female singers for myself, and many concubines, the delights of men. 9 So I became great and surpassed all who were before me in Jerusalem; my wisdom also remained with me. (2:4–9)

The Teacher explicitly refers to his achievements (2:4).

For the Teacher, Death is the great equalizer —it doesn’t matter if you’re rich or poor, a success or a failure.

He built and planted; he created gardens, parks, and reservoirs (2:4–6). His household consisted of many servants and livestock, and he adds that his household was greater than all before him in Jerusalem (2:7). He became exceedingly wealthy, with the treasure of kings and provinces (2:8). The Teacher is not bashful in assessing his achievements: he became great, and he overtook all his predecessors in Jerusalem (2:9).
If we stopped reading at v.9, we would think that the Teacher has fulfilled the dream of Proverbs. He has lived by wisdom (2:9), he has achieved, and he has been rewarded with wealth and success. Indeed, I think the Teacher wants us to see his achievements as a “Proverbial success.”

But then comes the kicker:

11 When I considered all that I had accomplished and what I had labored to achieve, I found everything to be futile and a pursuit of the wind. There was nothing to be gained under the sun. (2:11)

He has achieved all that could be achieved. He has lived according to wisdom. He has become a success. But, at the end of the day, the Teacher finds all this to be futile. It is mist. It is vapor. All his achievements are fleeting.

The truth that the Teacher grapples with throughout the book of Ecclesiastes is that everything must be seen in light of one overarching reality—Death. A generation goes and a generation comes (1:4); there is no remembrance of those who lived before (1:11); all the fruit of your work will be left to another when you die (2:18); all come from dust, and all return to dust (3:21).

For the Teacher, Death is the great equalizer—it doesn’t matter if you’re rich or poor, a success or a failure. Death wipes out your achievements and makes your work irrelevant. Death renders you back to dust.

So, Ecclesiastes gives us a sober qualification to the optimism of Proverbs. We could think of them both as developing the themes of Genesis 1 and Genesis 3. In Genesis 1, God creates the world, and humans will do well if they live within the design he has set up. Proverbs draws on this to say that life according to wisdom recognizes that God is creator and we are his creatures living in his world. But Genesis 3 brings corruption through the Fall, and humanity will no longer be able to live perfectly in God’s creation. Sin and death are in the world, and work will be tough. So Ecclesiastes recognizes that death brings futility to all our activities and aspirations. There is no escaping the consequences of Genesis 3.

At least, there is no escape that the Teacher can see. Not yet.

Constantine Campbell (PhD, Macquarie University) is associate professor of New Testament at Trinity Evangelical Divinity School. He is the author of several books, including the 2014 Christianity Today Book of the Year in Biblical Studies,  Paul and Union with Christ.
All posts by Constantine Campbell   |   follow on &
View Add a Comment
“Let Us Make” Points to God’s Unity and TrinityRe-Reading Paul: What Is Being Said and Why It Matters
Sapientia RSS
Newsletter Sign-up
More in Exegesis See All
More in Human Flourishing See All