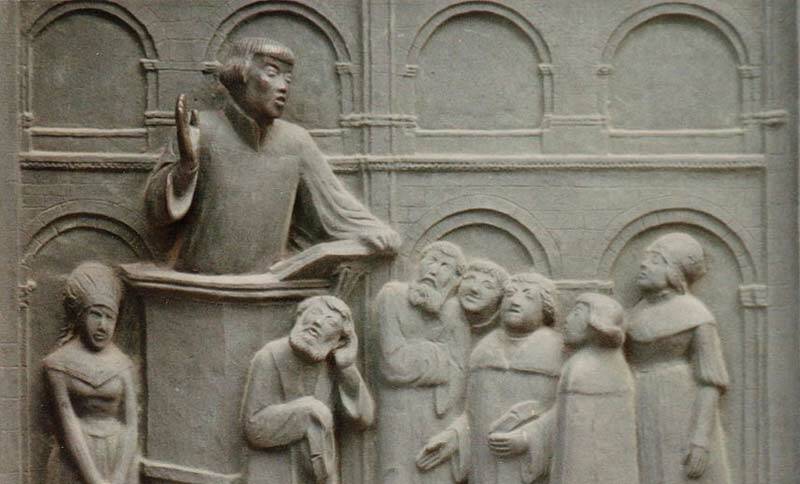 In the background of Huldrych Zwingli’s (1484-1531) reflection on 1 Kings 18:41-46 is the scholastic distinction between God’s absolute power (potentia absoluta), through which, restrained only by his nature and the law of noncontradiction, he can bring about all possibilities, and his ordained power (potentia ordinata), whereby God exercises his power according to the covenant made between himself and creation. Drawing on this distinction, Zwingli considers whether the rain that came on Elijah was a miraculous extension of God’s absolute power or an example of God’s ordinary power manifest in the outworking of nature.

And Elijah said to Ahab, “Go, eat and drink, for there is the sound of a heavy rain.” So Ahab went off to eat and drink, but Elijah climbed to the top of Carmel, bent down to the ground and put his face between his knees.  “Go and look toward the sea,” he told his servant. And he went up and looked. “There is nothing there,” he said. Seven times Elijah said, “Go back.” The seventh time the servant reported, “A cloud as small as a man’s hand is rising from the sea.” So Elijah said, “Go and tell Ahab, ‘Hitch up your chariot and go down before the rain stops you.’” Meanwhile, the sky grew black with clouds, the wind rose, a heavy rain started falling and Ahab rode off to Jezreel. The power of the Lord came on Elijah and, tucking his cloak into his belt, he ran ahead of Ahab all the way to Jezreel.

When at the prayer of Elijah rain was given after so long a course of years, a little cloud not bigger than a person’s hand appeared, then grew as clouds do, and poured out such generous showers that all things were restored. If this rain was accidental or given by the power of nature, not by Providence, who could have made Elijah sure of its coming, when he promised rain so persistently, especially in so weighty a matter in which he had brought forward the rain as witness that his Lord who had given the promise was God? Since, then, the rain fell by the providence and arrangement of God, it is immaterial to us whether it was poured out by a combination of natural forces adapted to do this at the time or by a new miracle, provided we understand that before the foundation of the world Providence so foresaw all things and had all things so clearly before it that Providence knew that the conjunction of the natural forces that should produce all that abundance of water would coincide with the wickedness of the world, which it wiped out by the waters at the time of Noah.

So also with the plentiful showers that were brought on after the long drought. For whether these things occurred in regular course or out of course, the warning and prophecy about them show that they were done by Providence. For if they happened in regular course, if a flood in natural course coincided with the wickedness of humankind, divine wisdom and providence are reflected from them. If the waters were poured forth out of course, again we see both these, righteousness as well as power. For God does miracles out of the ordinary course of things, that the astronomers and those who, like them, wage war against the sovereignty of the Deity like the giants may not be able forever to attribute everything to some force of nature, but may be compelled to recognize a greater force.

“God’s Use of Clay Reminds Us of His Power and Our Humility” Huldrych Zwingli on Genesis 2:7.