Rev. Basua now works for an international organization, and thus has more resources, so when his sick and nearly destitute brother-in-law came from the village seeking help, Rev. Basua provided Nzuzi and his family with housing and support. But then the rest of the family told Rev Basua that they suspected Nzuzi of being a witch. Since they knew Rev. Basua would never approve of asking for help from a traditional  diviner, they asked if he would be willing to consult a Christian Prophet who dealt with witchcraft. He agreed. 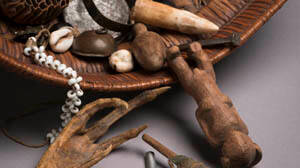 Witchcraft is a pervasive problem throughout Africa, including within the Church.

Nzuzi was under the impression that the reason his family was consulting the Prophet on his behalf was because he was a victim needing treatment. No one informed him that the real reason was that everyone thought he was a witch. The Prophet indicated that there was a needle in Nzuzi’s leg – moving up and down his leg. On being asked if he ever felt it, Nzuzi affirmed that he did. With everyone gathered round, and with Rev. Basua filming, the lengthy process began – where the skin was peeled off the bottom of Nzuzi’s foot making a round hole about 2” in diameter – and where the prophet proceeded to probe with cloth held against the wound – eventually withdrawing the cloth to show a needle sticking out of the wound, a needle supposedly having been drawn out of his leg. A variety of “amazing” phenomena were witnessed – the one on film involved a burst of smoke coming out of the cloth where the Prophet was probing, and again smoke rising from the “olive oil” that the Prophet poured on the corner of the room, where he then “discovered” a tooth.

Also on film were two serious burns on Nzuzi’s back. Rev Basua said that he wasn’t able to catch this on film, but that the Christian Prophet had done something to probe his back and flames had burst forth from Nzuizi’s back.  All this time Nzuzi’s participation in this painful process was based on his belief that he was being treated as a victim of witchcraft. Basua was impressed with the phenomena he observed, although he is not sure what to think of it all.But at the end of the session the Prophet then pronounced Nzuzi a powerful witch who killed people with the needle in his foot, who “ate” people with the tooth, and who traveled overnight supernaturally to distant places like Europe (propelled by a force similar to jet engines from his back). The prophet claimed to have removed the witchcraft.

Nzuzi was upset with everyone over the accusation that he was a witch (and perhaps over having been misled as to the purpose of consulting the Prophet). He insisted he was not a witch. But some of his own earlier comments (such as his agreement that he sometimes felt a needle in his leg) was taken as confirmation of his guilt.  Apparently for a short while it was felt that the witchcraft power was gone, but soon the gossip stressed that witches easily re-acquire their power. Soon everyone agreed that Nzuzi was (again) a witch, something having already been affirmed by no less an expert authority than the Christian Prophet. Everyone agreed that Nzuzi’s faithful church participation and leadership was simply the typical strategy of a witch attempting to avoid the suspicion of others.  Rev. Basua continues to support and protect Nzuzi who has now been moved to a small isolated farm. Rev. Basua was impressed with the phenomena he observed, although he is not sure what to think of it all.

1.  In regions where Christianity is influential, Christians typically refuse openly to consult traditional diviners (although, like King Saul, when facing crises and moments of weakness, they might secretly under cover of night consult a diviner). But in those same regions there has sometimes emerged an alternative category of person, the Christian Prophet, who uses similar techniques to accredit a similar message about certain people being witches. These prophets do not emerge from formal seminaries, but set up shop typically with no theological training. Rev. Basua speculated that some diviners may simply repackage themselves as Christian Prophets – an essential change in identity if they are to openly attract Christians as clients of their services.

2.  Core to the persuasive ability of such prophets is their ability to amaze. Mysterious fire and smoke and the appearance of tooth and needle being central in this case.  Having myself seen films of Filipino faith healers with their trickery and sleight of hand exposed, I was personally not impressed with what I saw – which seemed to me exactly the sort of sleight of hand and misdirection used by charlatans. A quick look on the internet shows that there are simple ways that anyone can create a mixture that can be used to create similar effects (such as smoke).

Core to the persuasive ability of such prophets is their ability to amaze.3.  Again I am struck by how commonly people attribute amazing powers to impoverished, destitute individuals such as Nzuzi. If these purported witches are so powerful, then how come typically it is old widows, orphans, and other destitute individuals that are supposed to be the source of such incredible power?

4.  I again come away sensing that the test of any Christian intervention is not the amazing nature of observed phenomenon at the moment of engagement – but the long-term social consequences of the intervention in the lives of those involved. In this case, it appears that this “Christian” intervention amazed people and accredited the Prophet’s power, giving him new clients – but in every other sense left the situation unchanged or worsened. Everyone still believes the old man is a witch, even more strongly than before. Yes, with the support of Rev. Basua, Nzuzi is still alive and protected – but he is socially isolated, with everyone else agreeing he is a witch and treating him as such.  In my view, any account of Christian intervention must focus on the long term consequences to all involved, not simply to what supposedly happens in the moment of engagement.

5.  Finally, local pastors with formal theological training find themselves being compared to these Christian Prophets, and are seen as deficient because they are not able to accomplish the same things. As Rev. Basua said to me, tongue in cheek, “My seminary curriculum never taught me how to find and remove the needle from the witch’s body.”

6.  Somehow formal theological training across Africa must help pastors understand and minister wisely in contexts where these sorts of realities are central.  This will require much theological work from many.