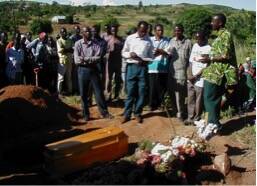 I could not simply dismiss such beliefs as unscientific. Science is a method that limits itself to cause and effect in the material world and what can be empirically verified with the scientific method. Unlike philosophical naturalism, it does not assume that it explains all that exists. Science is not especially good at giving meaning, love, or comfort to the sick and grieving. Nor does it do well at deciding what is evil or at seeking justice. For most Tanzanians an invisible world of spirits and powers powerfully influences the material world. My friends Norman Miller and Paul Gifford who have written on witches may hope that We do not need to treat as a package deal belief in the Holy Spirit, God’s active work, miracles, and demons—as well as witches.Africans will go through an enlightenment and become modernists who trust only the senses and “science.” But I have little hope for this. Even Western academia has long shifted toward a postmodern approach that no longer believes the certainties of modernity.

Steven D. H. Rasmussen, PhD has taught for 20 years in East Africa: Currently graduate students at NEGST in Africa International University; Previously at Lake Victoria Christian College in Northwestern Tanzania. Prior to Africa, he pastored in the USA.
All posts by Steve Rasmussen
View Add a Comment
Say "I Won't Give Up": Reflections on the Emerging Adulthood ConsortiumEmerging Adulthood Consortium: Summary
Sapientia RSS
Newsletter Sign-up
More in Church & Culture See All
More in Witchcraft Accusations See All