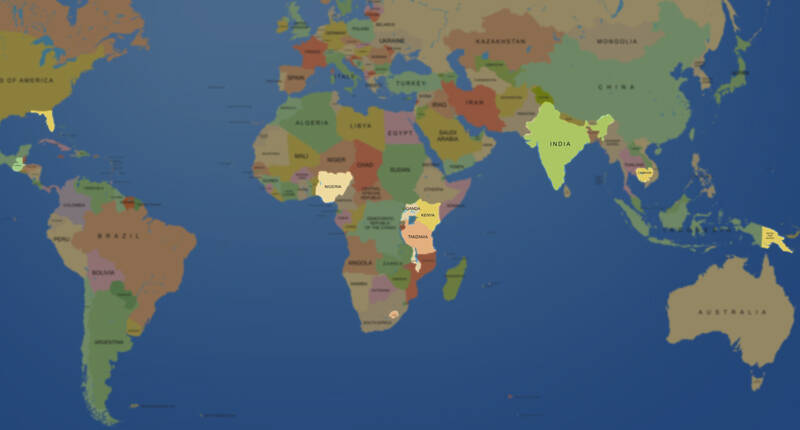 Spring 2015: Witchcraft in the News

When considering witchcraft and witchcraft accusations in the news over the last month, one should note its widespread geographic distribution (highlighted in the map above).

For example, one finds news of older women lynched and burned (or hacked) to death as witches in the last few days in Nigeria, Guatemala, India, and New Guinea (see here or here). One news account last week from India featured a 35-year old woman accused of witchcraft who was gang-raped in response.

One also finds accounts of men physically attacked and/or killed after having been accused of having caused the death of others through witchcraft/sorcery in Cambodia (see here or here) and in India.

One June 4 news article reports that in Kalifi, on the coast of Kenya, the police have records on 104 elderly people killed in this last year by younger relatives who charged them with being witches, with the police suspecting that even more such deaths have not been reported. A June 5 new article reports that since 2000, according to government figures, more than 2,000 people, mostly women, have been killed across India after being accused of practicing witchcraft – with the actual figures likely much higher, since such killings often occur in village settings with village support, and without being reported to police.

From Limpopo, South Africa, we learn of 17 witch-hunters in court for having burned the house of a Pentecostal pastor who had told stories of his pre-conversion life as a witch.

In the United States, we learn of a Florida woman who physically attacked her pregnant neighbor, believing her to have harmed her through witchcraft.

From Uganda, we hear about a school that had to be temporarily closed because of student accusations that teachers were practicing witchcraft.

In Malawi, four men were arrested with human bones thought to be from albinos who were murdered to use their body parts in witchcraft.

In Tanzania, eight people were arrested after having cut off the hand of an albino woman to be used in witchcraft. Also from Tanzania comes the news report that albino killings tend to increase around election time, lending support to the idea that politicians are paying “witch doctors” to help them win elections through the use of witchcraft involving albino body parts.